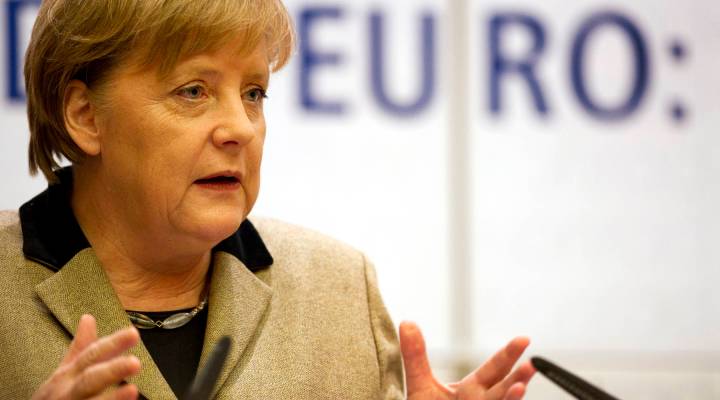 COPY
German Chancellor Angela Merkel delivers a speech during a celebration to mark 10 years of the euro in Berlin on Jan. 23, 2012. European leaders agreed today on a deal for more fiscal unity, based around the German model of austerity. ODD ANDERSEN/AFP/Getty Images
Mid-day Update

German Chancellor Angela Merkel delivers a speech during a celebration to mark 10 years of the euro in Berlin on Jan. 23, 2012. European leaders agreed today on a deal for more fiscal unity, based around the German model of austerity. ODD ANDERSEN/AFP/Getty Images
Listen Now

European leaders agreed on a new treaty at a summit in Brussels. The treaty forces countries to balance their budgets and limit their deficits. It’s being touted as a great long-term solution to the debt crisis, but in the short term, the focus is still on Greece, which is trying to finalize a debt reduction deal with  private creditors by the end of the week.

Exxon Mobil’s fourth quarter profit rose 2 percent as higher oil prices made up for a drop in production.

We just got earnings from Pfizer, which says its profit fell to $1.5 billion last quarter — that’s about half what it made in the same period a year ago. Pfizer isn’t making as much in part because the company just lost patent protection for its blockbuster cholesterol drug Lipitor, and as a result, now faces competition from generic alternatives.

Home prices were still falling as of November. The S&P Case Shiller index says prices dropped in almost all of the cities it surveys.

The World Trade Organization has ruled that China must immediately drop its system of export taxes and quotas on a range of raw materials. The minerals are essential for the U.S. industrial sector.

The European Union’s antitrust watchdog says it is probing whether Samsung Electronics has illegally prevented competitors from using key patents on mobile phones.

A small fish tale… very small. Four hundred fisherman competed in a charity ice-fishing contest in Michigan over the weekend. The prize for the biggest fish: $3,000. The winning catch: a four and a half ounce perch. And that small perch was the only fish anyone caught all day.  According to the Daily Press of Escanaba, there were other prizes, they had to be given away in a random drawing. Probably not one of those fishing trips you brag about later.

To LAX airport here in Los Angeles, where a tourist from the U.K. was detained for some messages he sent on Twitter. He tweeted that he was going to: “go and destroy America.” Turns out, when he said “destroy,” he meant he wanted to get wasted and party in America. Didn’t matter to Homeland Security, who sent him right back to the U.K.

Ever wondered why the Super Bowl uses all those X’s and V’s instead of just saying, “Super Bowl 46″/ A historian with the Kansas City Chiefs says the idea to use Roman numerals came from former Chiefs owner Lamar Hunt. He thought they made the game sound more important.