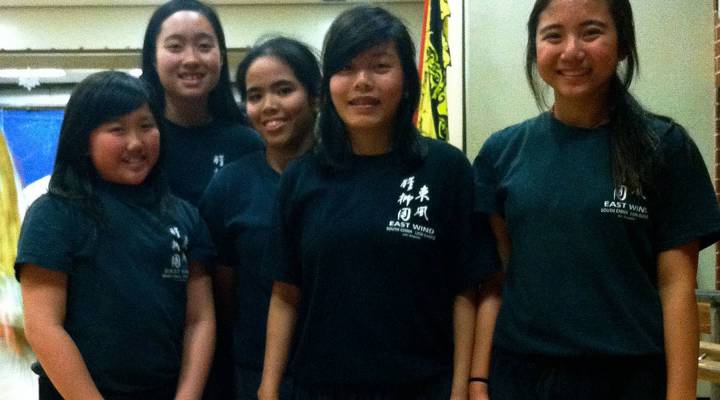 Tess Vigeland: The professor was talking at the start of our tour about those red envelopes of money given to children by their elders. It’s called lai see. And another place you’ll see it is during a traditional lion dance. As performers — usually from martial arts schools — make their way through the streets during a parade, they’ll be handed those red envelopes.

Our senior producer Paddy Hirsch went to a lion dance rehearsal last weekend to talk with some of the performers, including:

We asked the five girls what they planned to do with their lai see.

Lauren Lem: So everyday, we have lai see from relatives and our parents and older adults. It’s kind of exciting. When you’re opening it, you don’t really know what to expect. You might get a lot, you might get a little.

Erika May: You say thank you to them and thank them for the money. But you don’t open it in front of them, because it’s considered, like, rude or disrespectful.

Elaine: So, you always open it when you get home, when they’re not looking at you. If you open it in front of them, they’ll be like, “Well, that person’s rude.”

Erika: Every time… Well most of the time someone gives you a red envelope for Chinese New Year, they would have new, brand new bills in them, because it’s kind of saying “We’re wishing you a new year.”

Anne Huang: Yeah, I guess around this time of year, money’s kind of important. But it’s not the entire story.

Vive Le: I don’t think it’s, like, super important, because it is important, but not like take advantage of it and put it over your family. So like, the people you love should come first. So like, I could be poor and not have money and I’ll still be happy with the people that I love and stuff.

Lauren: I think I’m gonna save it first. I might spend like one-fourth of it on some things I might want, like new clothing. Um, I think the other three-fourths I’ll save for college. Something better.

Elaine: I would put it into my college fund.

Erika: Keep it and save it up.

Erika: For anything. In case of emergencies or for college or things that you really need.

Anne: To help out our parents if they can’t pay the rent. Stuff like that. Save up for college.

Vive: I already know I’m going to spend probably, like, part of it on boba at Quickly’s. But for sure, the rest of it’s gonna be “in case of emergency” money, because there’s a lot of things that could happen.

Vigeland: I love those girls. You haven’t heard the last of these smart savers. We’ll have a little something for them at the end of the show.