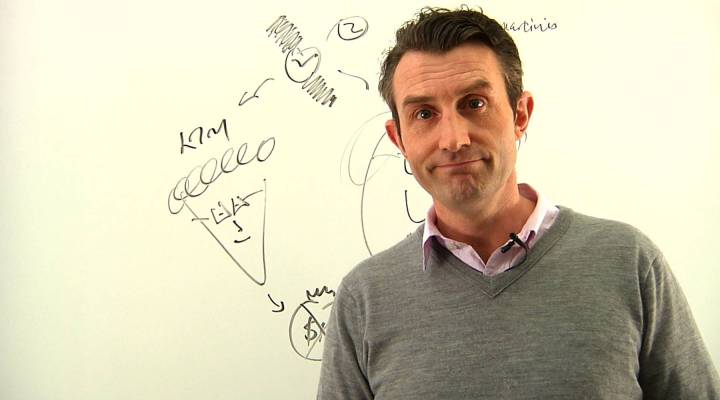 Learn the difference between secured and unsecured debt -- a lesson that Irish taxpayers could use as they face the prospect of footing the bill for the bailout of state-owned Anglo Irish Bank. Angela Kim/Marketplace
Marketplace Whiteboard®

Learn the difference between secured and unsecured debt -- a lesson that Irish taxpayers could use as they face the prospect of footing the bill for the bailout of state-owned Anglo Irish Bank. Angela Kim/Marketplace

Irish taxpayers are unhappy. Why? Because they’ve been told that they have to pay back investors who lent money to a bank called Anglo Irish, which went bust and was bought by the state last year.

The reason they’re upset is not just because it’s a lot of money — more than a billion euros — or because Ireland is in no shape to be paying vast amounts of money out to anyone. They’re upset because the investors were given no guarantee that they’d get their money back.

These investors lent money to the bank in the form of bonds. Bonds are usually pretty simple investments, and at their most basic, they come in two forms: secured and unsecured.

Imagine your cousin Ricky comes to visit you one afternoon. He’s a bit strapped for cash, and he’s off to Vegas for a bachelor party. Can you lend him a thousand bucks? He’ll pay you back money — honest!

You could, of course, kick cousin Ricky into the street, but assuming you want your cousin to have a good time at the tables, you have a couple of options. You could hand over the money and tell him you’ll see him on Monday. Or you could tell him to hand over his Rolex, and tell him that you’ll return it to him when he returns the money to you.

Which option makes you feel more secure about getting your money back?

If you took option number one, your loan to Ricky was unsecured. If Ricky loses everything, gets into a fight with a Russian mobster and leaves the country, you are out of luck.

But if you opted to keep his Rolex, then you can sell the watch to get your money back. In other words, your loan to Ricky was secured.

If Ricky is really desperate for the cash, he might offer you an interest payment. Lend him the money, and he’ll give you back the grand plus two tickets to the Beatles’ “LOVE” at The Mirage! That’s what you get for taking the risk that you might not see Ricky or your money ever again.

But ask for his Rolex as security, and suddenly there’s a lot less risk involved. Now you’re just doing him a favor, which means the only compensation you’re gonna get is a few beers down at Clancy’s.

Ricky is just like any company — including Anglo Irish Bank — that issues bonds. The difference is that instead of expensive watches to back their secured debt, companies use stuff like real estate, or pools of mortgages, or all of their assets. If the company goes bust, the secured lenders share all that stuff between them. Because they’re likely to get some, if not all their money back, these secured investors only get paid a small rate of interest.

Unsecured lenders, on the other hand, get paid a lot more interest. Why? Because if the company goes bust, they only get the scraps that are left after the secured lenders have been paid. The only way these investors can get anything out of the company is to take legal action.