But now, General Motors has regained its spot as the world’s best-selling automaker. It’s a story, in part, about GM’s turnaround since being bailed out by the federal government. But it’s also a story about the potholes other carmakers have hit.

For more we’ve got Marketplace’s Amy Scott with us now. Good morning Amy.

Hill: So is this a story of GM’s resurgence or other carmakers’ struggles?

Scott: Well it’s a little of both. For the past few years, Toyota was number one. But of course, Toyota was really affected by the Japanese earthquake and tsunami last March. And that happened just as it was recovering from a wave of recalls and bad publicity.

GM has definitely made progress since its bankruptcy in 2009; it’s turning a profit. But one analyst told me he doesn’t expect GM to make a big deal about being number one because of the tough conditions for Toyota.

Scott: Volkswagen is definitely one to watch. They’re doing really well in Europe; they’re expanding in Asia — really the only market they haven’t conquered is here in the U.S.

I talked to Ian Henry with Auto Analysis in London. He says biggest in sales isn’t necessarily best.

Ian Henry: It’s good for the companies to be able to say we produced the most vehicles, but at the end of the day I think what really matters is whether they’re making profits. And that is probably the more important factor.

And when it comes to profits, Volkswagen is already on top. It overtook Ford in 2010; by 2018, it hopes to be both the biggest and the most profitable. 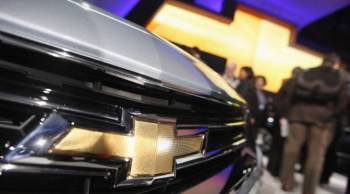