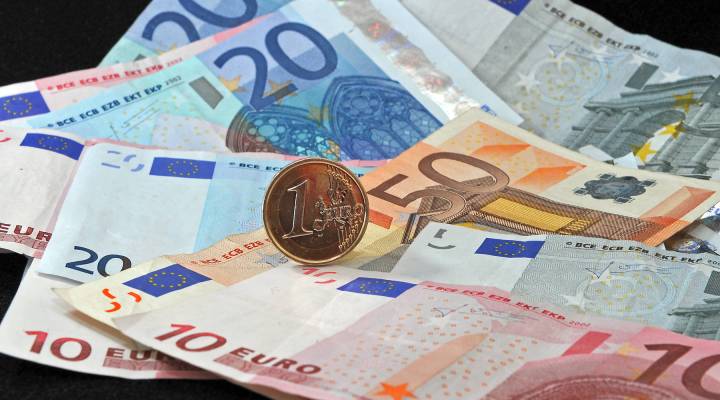 COPY
The euro has much support in beleaguered Greece and Italy, but in Germany -- the eurozone’s strongest economy -- many wonder if it’s worth the cost. PHILIPPE HUGUEN/AFP/Getty Images
Mid-day Update

The euro has much support in beleaguered Greece and Italy, but in Germany -- the eurozone’s strongest economy -- many wonder if it’s worth the cost. PHILIPPE HUGUEN/AFP/Getty Images
Listen Now

We’ve got good news on the jobs front. The number of people applying for unemployment benefits fell by 52,000 last week to 352,000. That’s the lowest level in almost 4 years. Consumer prices didn’t change a bit last month.  Still no price inflation.

Builders ended 2011 with a third straight year of dismal home building and the worst on record for single-family home construction.

The average rate on the 30-year fixed mortgage fell again this week to a record low. The eighth record low in a year is attracting few takers because most who can afford to buy or refinance have already done so.

Greek leaders are back at the negotiating table with the country’s lenders in Athens today. They’re trying to avoid a messy default by figuring out just how much Greek debt has to be repaid.

In London, Rupert Murdoch’s media company says it will pay damages to 18 victims of phone hacking.

Southwest Airlines is making money even with higher fuel prices, thanks to full planes and rising fares.

Bank of America says it made a profit of more than a billion dollars last quarter, but that’s in part thanks to putting less money aside for losses.

A home-coming story gone wrong. Kitchen company Williams-Sonoma was born back in 1956 to shop-keeper Chuck Williams in the Northern California town of Sonoma. But as the store grew up, it yearned for the big city, and moved to San Francisco to make its fortune.  Now, five decades later, Williams Sonoma wants to come home. Back to its roots. Back to Sonoma.  But the city council there isn’t so sure they want it. They’re considering rules that’d keep chain stores out, even if one of those stores was once their own.

And how significant is the leap second? Some businesses want to scrap it.