The ultra-connected car of the future

The ultra-connected car of the future

Cars didn’t used to have much in the way of electronics. There were gears, sure. There were carburetors and pistons and belts. But there weren’t a lot of computers until the last several years. The cars of tomorrow, however, will likely make the computerized  cars of today look like Model Ts by comparison.

At the Consumer Electronics Show in Las Vegas, I sat down for a conversation with a car from Ford. It was Ford’s way of showing off some of the voice features we’ll be seeing and hearing more from in the near future. It was a bit cloodgy. I told the car to set the temperature to 75 degrees, then I had to confirm that’s what I wanted, and then confirm again about the temperature, using my most careful diction. By that point, to be honest, I would have just reached out and turned the knob like I’ve been doing for years. When I asked for some heavy metal music, however, the screeching guitar solo kicked right in, so that was cool.

But all that is just entertainment and comfort. Technologists in the auto industry have set their sights a lot higher than that. I sat down with Gary Strumolo, Manager of Vehicle Design and Infotronics for Ford Research and Innovation, says cars need to keep you safe too.

“So there are three ways in which we get an estimate of the driver workload,” he says. “One is by understanding the stress on the driver himself, and we do that through built-in devices like heart rate monitoring systems that we have built into the seat.”

The car also estimates how busy the driver is based on traffic outside the car and activity inside the car. “If that estimate is high,” says Strumolo, “and something comes in, say a phone call comes in at that time, we would route it  directly to voice mail. So, if you’re making a turn, you’re in a big turn or something, then you’re occupied. And so, we would defer things that might otherwise just come into the car until you’re less stressed.”

The National Transportation Safety Board recently recommended states ban use of cell phones – even hands free ones – while driving. But Ford, which uses a communication and entertainment system called SYNC in its cars, takes the view that people will always want to do more while driving than just drive. They want to make calls, check email, and update Facebook.

“When we developed SYNC,” Strumolo says, “we did it with the understanding that if they are going to do that, we want to find as safe a way as possible for them to carry that out, and we believe that all the research that we’ve studied on actual driving studies, not simulator studies, but actual naturalistic driving studies show that if you keep your eyes on the road and your hand son the wheel, you’re pretty good.”

In other words: the Jim Morrison standard. (You guys know “Roadhouse Blues”, don’t you? Really? I’m that old?)

Ford cars aren’t the only place you’ll be noticing more technology. There are apps coming to OnStar, the service you call through your car if you’re in an emergency. Like Ford, OnStar promises they won’t distract you and end up actually those emergencies.
“Most of the apps that we envision occurring here,” says OnStar Vice President of OnStar Planning and Business Development Nick Pudar, “are going to be apps that you interact with when you’re not in your vehicle. It’s more of a preparation for when you do travel”

Pudar envisions apps that text you when you’re low on gas or when you’re electric car needs a charge.

Also in this program, not all the products you see at CES are mind blowers. Some of them are more like head scratchers, such as the VibaBody Slimmer. It’s a platform and you stand on it. It vibrates like crazy and then somehow you’re supposed to lose weight. I hopped on for a little while. Didn’t slim down much but my legs sure felt funny for a while. 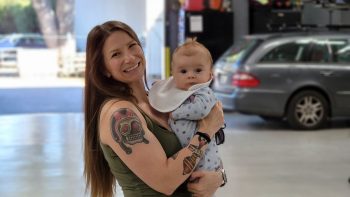