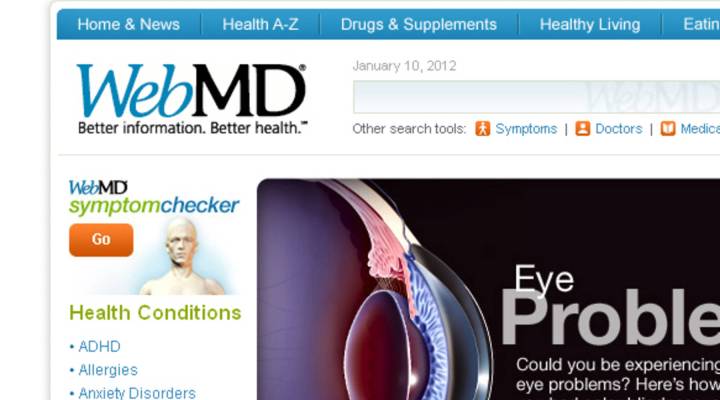 Kai Ryssdal: From the world of online health care came this news today: The CEO of WebMD Health has resigned. The company also gave itself a dismal financial diagnosis, saying earnings are expected to fall this year.

It’s a surprising turn of events for WebMD, which was for a long time the company that had cracked the code for making money online. It charged premium prices for its ads as pharmaceutical companies scrambled to get on its site.

And, really — why not? If you’ve got somebody looking up migraine cures and you sell migraine medication, it stands to reason, right? So what happened to the online advertising titan that was? Marketplace’s Stacey Vanek Smith has the story.

Stacey Vanek Smith: WebMD’s first problem is the pharmaceutical industry itself. Blockbuster drugs like Lipitor have gone off patent and lower profits for big drug companies mean there’s less to spend on ads.

Thomas O’Connor: Less money means less huge campaigns, which means less money for all the people who live off of the pharma budgets.

WebMD’s also facing more competition for the ads it is getting, sites like Everyday Health and Patients Like Me. And some of those competitors offer something extra to advertisers, because users register and give them personal information.

Peter Frishauf: WebMD visitors remain anonymous so they have a harder time in following their audience’s behavior.

WebMD’s ad-based model has come under attack, too. The site’s been accused of framing symptoms in the scariest possible way and conveniently displaying ads for a cure.

James Unland: There’s somewhat of a conflict of interest or a perceived conflict.

James Unland with the Journal of Healthcare Finance says WebMD was a pioneer in the online health care field, but hasn’t kept up with the competition. The site says it’s not for sale, but Unland thinks it could be an attractive buy in the future. WebMD attracts 80 million viewers a month.

Unland: I think it’s a takeover target. I think somebody wanting to get into the health care business, especially with the aging population, could take over WebMD and take it to the next level.

The next level being social media, online communities and a stronger multimedia presence.