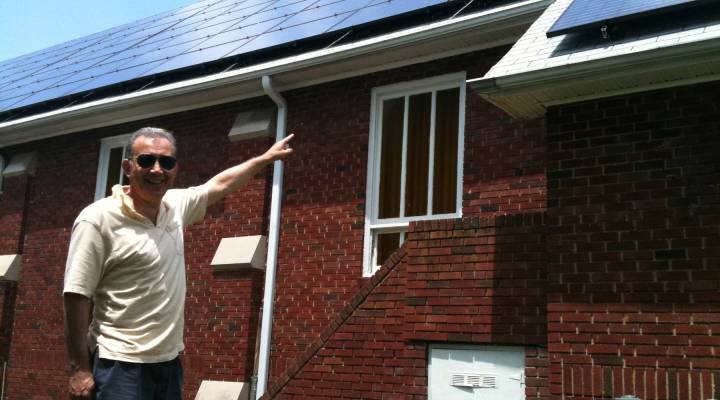 Tess Vigeland: When you live in a place with a lot of shade, it can be a challenge to generate electricity from solar power. That was the issue for the residents of University Park, Md. So in an effort to solve that problem, they decided to pool their money. They used the money to install solar panels on top of a local church, forming a small power plant in the process.

From WYPR in Baltimore, Stephanie Hughes has the story.

Stephanie Hughes: Caralee Vixler has been playing electric organ at the Church of the Brethren in University Park, Md., since she was 15 years old.

For the past year, that organ — along with everything else in the church — has been powered by solar panels.

Don Monroe: Yeah, for years, I had been looking at this roof saying, “Wow, we could do something more with that space.”

Don Monroe is a member of the congregation. He’s also part of the University Park Community Solar LLC, the group responsible for the panels.

Monroe: I think in this church, and certainly in a lot of other churches, these days there’s a real sort of consciousness of what we call “care for creation,” and this very much fits into that idea.

The project came about because it’s one of the only suitable spaces in town. The group’s president and founder, Dave Brosch, spent over a year trying to find a roof in University Park that would work.

Dave Brosch: Our neighborhood is filled with trees, and we have a lot of houses that are not oriented in the right way. So, we decided we needed to look for a large roof, and then combine our money together and bring it to one spot.

The group bought and installed the panels in July of 2010. Individual members could buy-in starting with $2,000. Now, they sell the energy to the church at a rate slightly lower than the local utility. Then, the company sells excess power back to the grid at wholesale prices.

Lisa Nau: The whole installation cost $130,000 so I guess you would say that bought me one-thirteenth of this power plant.

Lise Nau is another member of the LLC. Under the group’s business plan, she can expect to recoup her $10,000 investment in seven years — and then receive an 8 percent return in about 20.

Nau: It’s a really nice way for individual people who don’t have a lot of investment income to contribute to something that they believe in and that you can feel good about without having to lose money doing it.

Community solar has interested not just people who live in tree-lined towns, but also those who live in places with shared roofs, like apartment buildings and condos. Dave Brosch says he’s been contacted by people all over the country.

Brosch: Connecticut, North Carolina, California, the state of Washington. We’ve been giving information to anybody who would like it.

However, University Park’s model won’t work everywhere. Anya Schoolman is the founder of the Community Power Network. She says local regulations determine how much money you can make by generating solar power.

Schoolman says the models for community energy run the gamut. Some are barn raising projects, where people lower expenses by learning how to install solar panels themselves. University Park is more of a crowd-sourcing model, where lots of people come together to cover costs. But she also said the more people involved, the more complicated the project gets.

Schoolman: University Park is pretty unusual, and the reason is that it takes some real stick-to-it-ness to get these kinds of projects done. Perseverance.

University Park is now trying to replicate its own model: Dave Brosch says the group is currently in talks to put panels on top of a school, a synagogue and another church. But it’s not just a matter of finding a suitable roof; it’s working out all the details.

Brosch: If you’re doing something at a community level, it requires a little more organizing. And since we’re a democratic group, democracies tend to be a little messy. It’s more than just the panels, it’s people working together.

So while you may still need an LLC to make a profit, it’s starting to look like you may be able to turn to your village to raise a solar array.