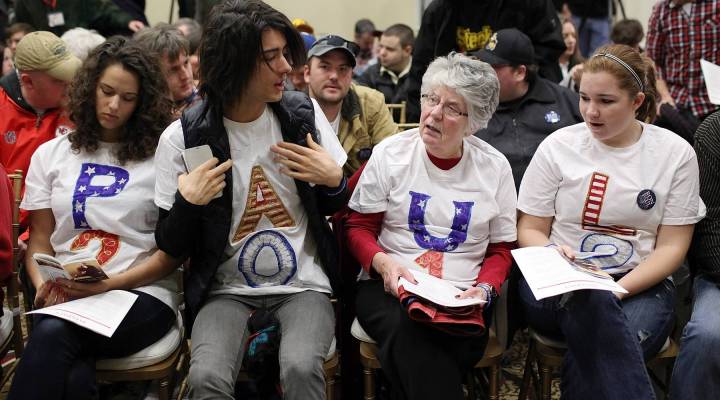 BP is suing Halliburton for the entire cost of the 2010 Gulf oil spill — estimated to be more than $40 billion. Halliburton cemented the faulty well that caused the oil leak.

Iran’s currency, the Rial, has fallen to a record low against the dollar after President Obama signed a new round of sanctions against Iran’s central bank.

Some gloomy news from Singapore that its economy shrank by nearly 5 percent in the last quarter. But that was better than forecasters had expected.

Official data show that the unemployment rate in Germany, Europe’s biggest economy, increased in December to almost 7 percent. Greece today said it would have to leave the European Union if it can’t finalize a deal for the latest bailout funds.

Ohio has temporarily banned some sorts of natural gas drilling, in some parts of the state. That after a series of rare earthquakes including one that rocked Youngstown over the weekend.

A North Carolina man was arrested last week after trying to buy a vacuum cleaner, microwave and other items with counterfeit money at a Walmart store. He offered the cashier a $1 million dollar bill. Problem? Besides the issue of getting change — more than $999,000 in cash — the U.S. Treasury has never produced a bill. But just because a bill doesn’t exist doesn’t mean people stop trying to pass it along.  In 2004, a woman at a Walmart in Georgia tried to use a $1 million dollar note. A few years earlier in Kentucky, a Dairy Queen cashier accepted a $200 bill from a customer ordering an ice cream sundae. The bill had a picture of George W. Bush on it, the sitting president at the time. The cashier gave $198 in change.

Finally, the price of Powerball tickets is doubling. Now a chance at the multi-million dollar pot will cost $2 dollars. It’s the first price increase in almost 20 years. On the bright side, the odds are better! Instead of a 1 in 195 million chance of winning, Powerball players will have a 1 in 175 million chance. So, probably still not a realistic retirement plan.