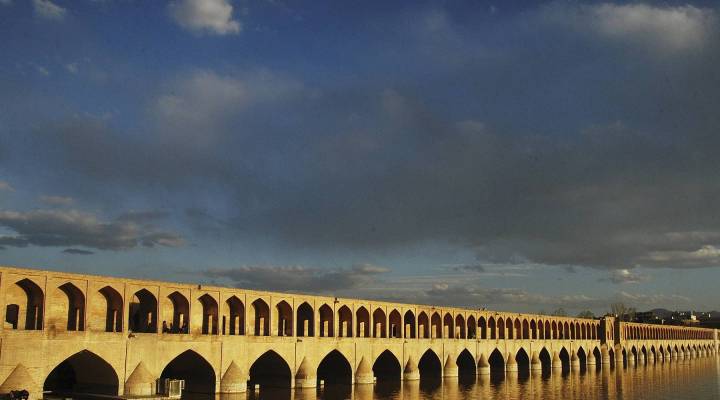 COPY
A general scenic view of the Siyo-se-pol bridge on the Zayandeh-Rood river in Isfahan, Iran. Authorities there are threatening to block the Strait of Hormuz, where 20 percent of the world's oil goes through. Majid Saeedi/Getty Images
Mid-day Update

A general scenic view of the Siyo-se-pol bridge on the Zayandeh-Rood river in Isfahan, Iran. Authorities there are threatening to block the Strait of Hormuz, where 20 percent of the world's oil goes through. Majid Saeedi/Getty Images
Listen Now

Average rates for Italian bonds went for about 3.25 percent. Half of what it was just a few weeks ago. Signs that worries about the European debt crisis are cooling off.

Iran has repeated its threat to block the Strait of Hormuz — where about a fifth of the world’s oil passes through.

The Nikkei fell by 0.2 of a percent, after Japan said its industrial output dropped last month.

In Green Bay, Wisc., Packers fans are Lambeau-leaping at the chance to call themselves NFL owners. The team has nearly sold out of its recent stock offering, and will sell another 30,000 shares at $250 a pop. It’s a sentimental investment — the shares have no resale value and don’t pay dividends.

Some people are willing to pay big to re-live disaster… and not just any disaster. A British company has nearly sold out of two memorial cruises that will recreate the doomed voyage of the Titanic. According to The Independent newspaper, the cruises will include history talks, a memorial service, but no actual iceberg collisions. The price tag for the adventure — up to $9300 per room.

A Los Angeles-area family was reunited with their Christmas gifts stolen from their home. The father called police on Sunday to report the crime, and then called back to say he knew where the presents were. He located them 100 miles away near San Diego. Police found the gifts and made an arrest in the case. How? An iPad was one of the items stolen. Complete with its location tracking technology.