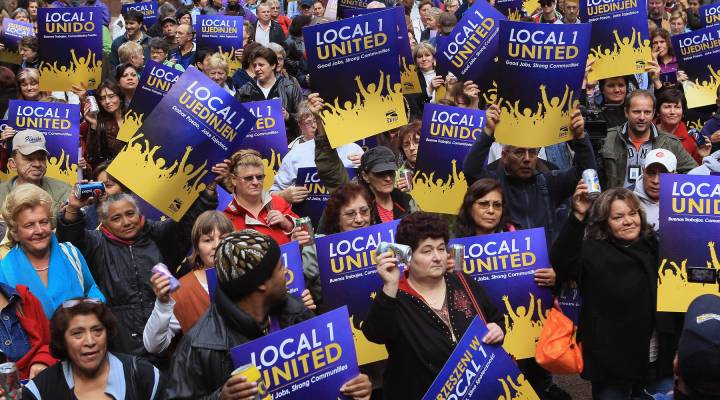 Janitors and supporters from Service Employees International Union (SEIU) Local 1 hold a rally outside the Thompson Center Sept. 28, 2011 in Chicago, Ill. The rally was one of 22 held nationwide by the union to galvanize their members before contracts for 160,000 janitors around the country expire next year. Scott Olson/Getty Images

Janitors and supporters from Service Employees International Union (SEIU) Local 1 hold a rally outside the Thompson Center Sept. 28, 2011 in Chicago, Ill. The rally was one of 22 held nationwide by the union to galvanize their members before contracts for 160,000 janitors around the country expire next year. Scott Olson/Getty Images

Adriene Hill: Now to New York, where negotiations start today between building owners and the union representing the people that clean those buildings. The four year contract will cover 22,000 workers and it’s shaping up to be quite a fight. There hasn’t been a strike in more than a decade but these are different times.

Stacey Vanek Smith: Thirty-six-year-old Ivan Alamendarez is sweeping the sidewalk outside the physics building at New York University. He works there as a janitor.

Ivan Alamendarez: We clean the offices, do bathrooms, we scrub, we strip, we wax. Whatever they ask us to do, we gotta do.

Alamendarez has been a member of the Service Employees International Union, or SEIU, for nearly 20 years. He is the sole provider for four children and a wife who has cancer, and says a strike would be financially devastating.

There’s a new determination and anger among union members this year, according to SEIU president Mike Fishman. They are fighting pay and benefit cuts.

Unions of all kinds are gaining momentum, says Michael Hillard, a labor economist with the University of Southern Maine.

Michael Hillard: We could look back on 2011 as the year the labor movement got its mojo back.

Hillard says the public increasingly sees unions as part of the 99 percent, instead of bloated, business-crippling organizations. And that’s giving them the confidence to threaten strikes.

Hillard: What I think is different is this sense that if they go out and strike, there will be a lot of people there to support them.

But Hillard says it’s the worst of times for unions, too. Building owners have already been lining up people out of work to replace the office cleaners.

And there’s not as much money to go around as there used to be, says Howard Rothchild. He’s negotiating the new union contract on behalf of the building owners.

And vacancies have doubled. Still, if there’s no resolution by January 1st, workers say they’ll strike.