Adriene Hill: What holiday cheer there was this shopping season didn’t make it to Sears Holdings Corporation. That’s the company that owns Sears and Kmarts. Today, after dismal holiday sales at the two chains, the company announced it’ll close somewhere between 100 and 120 stores. Talk about a lump of coal…

Nancy Marshall-Genzer: I can’t remember the last time I walked into a Kmart store. I went to Sears for the first time in years last summer. The experience was kind of depressing.

Howard Davidowitz: How on earth are they going to survive? Their stores are rundown, their service is poor. And their assortments are very weak compared to their competitors.

Davidowitz also says Sears and Kmart can’t offer the deep discounts of competitors like Wal-Mart and Target. He does say Sears hasn’t been hurt that much by online competition. He thinks it has a pretty good website.

But the holiday sales numbers were grim — they were down about 5 percent at stores open at least a year. Sears hasn’t said yet which stores it will close. 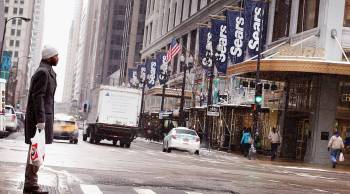