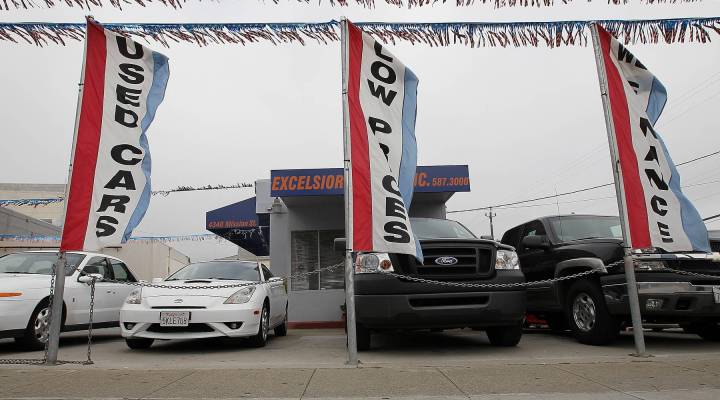 Tess Vigeland: In the market for a used car? Well, before you sign on the dotted line, you might want to hear this next story.

Ken joins us to talk about what he found. Welcome to the program.

Ken Bensinger: Thank you for having me Tess.

Vigeland: All right, let’s get to what “buy here, pay here” means.

Bensinger: It’s different than any other car dealership, because other car dealerships use an outside lender, like a bank or a credit union or something like that. In this case, they are the bank. And so they hold the note on it and you come back and pay there.

Vigeland: If you’re out looking for a car, what marks a “buy here, pay here” outfit?

Bensinger: Some of them label themselves as such, you know, it says “buy here, pay here” on the outside. Sometimes it’ll say it in Spanish and sometimes they will say, “We are the bank” on banners outside. Or they’ll say, “No credit, no problems.” But others don’t say anything about it, and you really don’t know until you’ve actually set foot in the lot. But when you get in the lot and they start asking you how much money you have, and what your credit score is and how many references you have, those are some alarm bells. A typical “buy here, pay here” dealer won’t let you pick a car until he knows your credit situation.

Vigeland: Wow. OK, so that’s really the key there is that the buying experience almost right off the bat is different.

Bensinger: Absolutely. They tell you what car you can buy and that’s based on complex calculations on what you can afford to pay every month. And when they plug that into a computer frequently, that will tell them what car in their lot will make them the most money off that payment scheme.

Vigeland: What about the loans that are being handed out by these places? Presumably, if it’s subprime, we’re looking at high-interest rates, bad terms for the consumer.

Bensinger: Yeah. That’s an understatement. These loans start around 18, 19 percent…

Bensinger: And they go up to 33, 34, 35 percent. The cars themselves are typically bought at auction and then they’re marked up. A guideline in the industry is you start mark-ups at 100 percent over acquisition price and you go up to as much as 150 or 200 percent, depending on the car and the market. Prices fluctuate not based on the value of the vehicle, but on how much the customer can pay. And customers get into three, four, five-year loans, typically. If they pay out fully, you’ll end up paying maybe $25,000 for a car that probably had a book value of $6,000.

Vigeland: Oh good Lord. Hey, what about government oversight? Is anybody following this?

Bensinger: These dealers do have regulations that affect them, but they are unusual in that they’re both dealers and lenders. And so they sorta slip into regulatory cracks. Most states have a consumer-lending regulator and they also have a car regulator, like a Department of Motor Vehicles. But neither agency is really expert at regulating the other bailiwick. And so, car regulators know how to regulate dealers, lending regulators know how to regulate lenders — but neither of them know how to deal with a place that does both. That isn’t to say they’re breaking the laws; many of them actually carefully the letter of the law. So if there’s a cap on interest rates in the state, they stay within it. But people will say that they actually sneakily get around it by raising the price of the car.

Vigeland: Who are the customers of these outfits?

Bensinger: A very very very high rate of single mothers and single parents in general. And there are people with bad credit or no credit. So it runs the gamut from people who have had multiple repossessions, foreclosures and sort of every bad financial mark you can have on your lifetime ticket. And some of these dealers build their whole business around targeting people who are in or recently filed for bankruptcy.

Vigeland: So this really sounds to me it’s a check-cashing, cash advance scheme on the car lot.

Bensinger: There’s a lot in common with the payday lending and the cash-advance lending, that sort of thing. A lot of the industry analysts on Wall Street who have covered the industry group it the same category, and there are some instances where payday lenders have acquired “buy here, pay here” lenders, in their words, to “diversify their portfolio.”

Vigeland: You mentioned Wall Street getting into the action here, and this was another kind of disturbing aspect of these loans, that many of them are being bundled and sold as a security, just like the subprime mortgages from a few years ago. Are people that crazy that they’re going to fall for something like that all over again?

Bensinger: Well, they say that money outsmarts common sense. Very often, these pay high yields when they’re securitized into bonds, and it’s very attractive to people. They mature in much shorter times than mortgages — I mean, these are three, four, five-year loans rather than 30-year loans. And so people think they can get in and get out without too much pain. There haven’t been any major defaults of this lately, but there have been some people on Wall Street — even someone at one of the big ratings firms — put out a warning, saying that this was growing too much, too fast and that the same thing was happening. Which is they were dipping too deep into the credit spectrum, buying loans and packaging loans of people that really really were on the edge, and that there was a real risk of the same kind of explosion.

Vigeland: So does that mean that some of us might be exposed to these loans, even if we’ve never stepped onto the lot?

Bensinger: Yeah, institutional investors are buying these securities. Mutual funds, pensions, retirement set-ups of other nature, insurance funds, banks — these are the kinds of people buying them, because they’re buying them off in million-dollar denominations and more. I found our research said that some of the largest mutual funds in the country have large holdings of these kinds of securities.

Vigeland: Ken Bensinger is with the Los Angeles Times. Thanks so much for coming in.

Bensinger: Tess, it was my pleasure. Thank you.