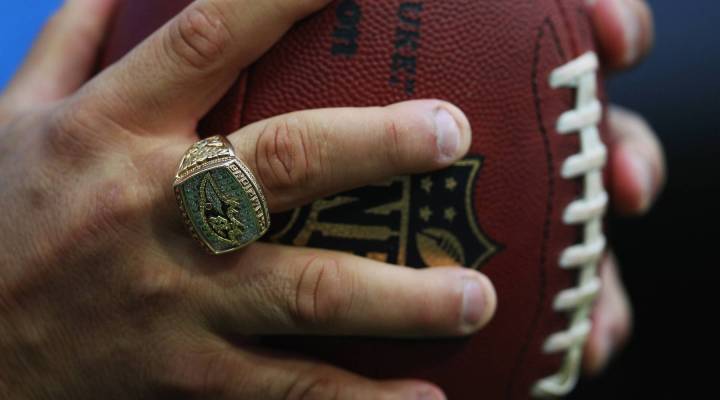 COPY
This winter, the Super Bowl party goes on the road. The NFL championship game will be available to stream on mobile phones. Warren Little/Getty Images
Mid-day Update

This winter, the Super Bowl party goes on the road. The NFL championship game will be available to stream on mobile phones. Warren Little/Getty Images
Listen Now

The European Central Bank was even more popular than expected this morning, when it offered banks three year loans with very low interest rates. Five hundred twenty three banks borrowed a total of about 489 billion euros or about $650 billion.

The NFL is going to make it even easier to watch the Super Bowl this year. The big game will be streamed live online and to mobile phones.

Today, the European Union’s highest court has ruled that the EU can force all airlines flying into Europe to pay for the pollution they cause. This will make U.S. airlines grumpy. They’d appealed the rule.

To LAX airport here in Los Angeles and some Transportation Security Administration agents who are trying to soften the agency’s image. According to the L.A. Times, they’ve formed a chorus and have been singing for holiday travelers in the terminals. Everything from “I Believe I Can Fly,” to a rendition of “What a Wonderful World.”

A new study finds people are more likely to lie when texting. Texting lets folks to communicate without worrying about their body language giving them away. According to the L.A. Times, researchers also found that people who’d been lied to were more upset if they’d been lied to over text than face to face. All of which makes me reconsider my less-than-forthcoming “I’ll be there in a minute” text messages.