Companies may have received ‘cosy deals’ on U.K. taxes

Companies may have received ‘cosy deals’ on U.K. taxes

Adriene Hill: Now the global perspective on business and economics. British lawmakers are accusing the U.K. taxman of giving major corporations an easy ride. It’s alleged the American investment bank Goldman Sachs was let off a tax bill worth $30 million.

Stephen Beard: The lawmakers attacked what they call “cosy deals” between tax officials and big business. They single out the chief U.K. tax collector for particular criticism. He was wined and dined by large corporations more than 100 times over the past two years. As a result, the lawmakers say, large companies — like Goldman Sachs — may have between them been let off billons dollars in tax.

Lawmaker Margaret Hodge says in a time of austerity — when public spending has been cut — this totally unacceptable:

Margaret Hodge: I think at a time when it’s hugely important that we maximise the revenue that comes in, it’s absolutely imperative that everybody is treated equally before the law, whoever they are, however big or small they are.

Goldman Sachs has refused to comment. But the U.K. tax authorities rejected the lawmakers’ findings. A spokesman said the idea that the Chief Tax Collector would cut a large tax bill in return for a glass of wine and a cheese sandwich is nonsense. 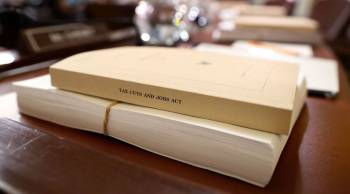 The tax bill’s reshaping of the American economy