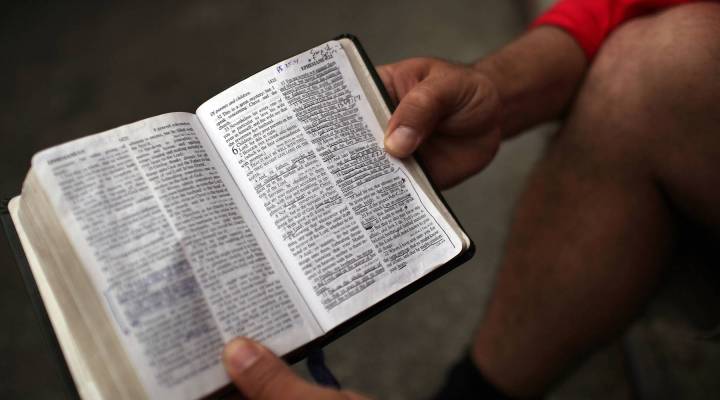 Going cashless isn’t the end of the world

What does the Book of Revelation really say about a cashless economy? Spencer Platt/Getty Images

Going cashless isn’t the end of the world

What does the Book of Revelation really say about a cashless economy? Spencer Platt/Getty Images

Tess Vigeland: So while I was researching this app story, I stumbled on a community that believes our increasingly cashless society was predicted, long, long ago in the Book of Revelation. Now I do not remember this from Sunday school, but these websites compare credit cards to the Mark of the Beast, that the cashless society is a precursor to the apocalypse. Scary reading. Scary enough for me to call up a priest!

The Reverend Father Felix Just is director of biblical education at the Loyola Institute for Spirituality. Hello Father!

Reverend Father Felix Just: Nice to be with you.

Vigeland: Before we go on — father, reverence, Your Holiness? What do you prefer?

Vigeland: OK. Well, let’s start first of all by citing chapter and verse here. What element of the Book of Revelation are we talking about?

Just: Well, if you wanna talk about a cashless society, then the reference that most people take is to the Book of Revelation Chapter 13, Verse 7.

Vigeland: Can you read that for us?

Just: Yes. It’s talking about the second beast in the second half of chapter 13 of the Book of Revelation, a beast that rises out of the earth. And it says in Verse 16 and following also it causes “all both small and great, both rich and poor, but free and slave to be marked on the right hand or the forehead, so that no one can buy or sell who does not have the mark. That is, the name of the beast or the number of its name.” And the next verse goes on to explain that this number of the name of the beast is the very well-known or infamous 666.

Vigeland: So what this is referring to is that when the revelation happens, that those who do not have this mark — in other words, Christian believers will not be able to buy or sell goods.

Just: Well, that is the way it’s often interpreted, but this is a complete and total misunderstanding of the Book of Revelation. The Book of Revelation is not something that predicts the future. To understand what it’s saying, you have to recognize that it what scholars call “apocalyptic literature.” It does talk about the struggle between good and evil, but it does so in very symbolic ways, and it has historical references, yeah, but not to us, living 2,000 years after the author. It has historical references to the first century.

Vigeland: OK, so the fact that so many of us are using credit cards and maybe even our phones to buy things that this does not mean that we are at the end of days?

Just: The Bible says absolutely nothing about predicting a cashless society, as some people claim. And in fact, if it did, the closest passage to anything that you could call a “cashless society” is not from the Book of Revelation, but it’s from Isaiah, Chapter 55. And there it actually seems to think of the cashless society as a good thing.

Vigeland: What does it say?

Just: The first verse says, “All you who are thirsty, come to the water, you who have no money, come receive grain and eat. Come without paying and without cost. Drink wine and milk. Why spend your money for what is not bread, your wages what fails to satisfy.” And so on. This is a text which is basically saying that in God’s view, maybe there shouldn’t be any such thing as cash. But that’s a good thing, in the sense that everybody would be abel to feed themselves or feed one another for free, because everybody shares everything in the messianic age in the ideals of God.

Vigeland: Then where does this fear of the cashless society come from?

Just: There’s a lot of fear not only of the cashless society, fear of one world government is usually related to that. But all of this is misinterpreting the book of revelation. Let me just use one more analogy for you: The Book of Revelation is really like the “Star Wars” movie of the first century.

Just: OK? No, it really is. Because it is talking about the struggle between good and evil, yes. But just like “Star Wars” was not meant to be predicting what’s gonna happen in five or 10 or 500 years, it uses what we would call science fiction, scifi imagery of our own day and age — you know, light sabers and space ships. Whereas the Book of Revelation uses the imagery of its own first century original context.

Vigeland: OK, so that would mean that in the New Testament, basically what you have “Luke, I am your Holy Father.”

Just: Well, I haven’t run with the “Star Wars”-Revelation analogy all that far myself. But you know, in a sense, just to get back to the “mark of the beast” from Revelation Chapter 13 — the point there is not that it’s gonna be any sort of a physical mark, whether it’s a tattoo or chip implants or use of credit cards, Social Security numbers and things like that. They’re just using imagery in the Book of Revelation.

Vigeland: So safe to say you use credit cards?

Just: I use credit cards, and you know, actually, somebody asked me a year ago, Would I get a chip implanted in myself? I said, No problem if it can be useful, maybe. It’s gonna have some problems just like anything. Cash has problems, credit cards have problems, even gold has problems. Whenever we talk about money, we have people who are gonna try to abuse the system. So I might not be an early adopter and be the first kid on the block to get the chip implant.

Vigeland: But they’re not holy problems.

Just: They’re not religious problems. There’s no moral problem that says we have to worry if we get chip implants or if we use credit cards that we are on the side of the Devil who is against using the gold standard of cash or something the way some of these websites are trying to promote.

Vigeland: Well Father Felix of the Loyola Institute for Spirituality, thank you so much for straightening us out on this one.

Just: Oh you’re very welcome. It was a pleasure talking with you.

Vigeland: Well now that we don’t have to worry so much about the End of Days, perhaps we should turn our attention to the end of the year. It is the time when you need to take care of all that last-minute tax stuff from charitable donations to how you’re going to spend the rest of that Flexible Health Savings Account. So we’ve got a list for you to check, once or perhaps twice.