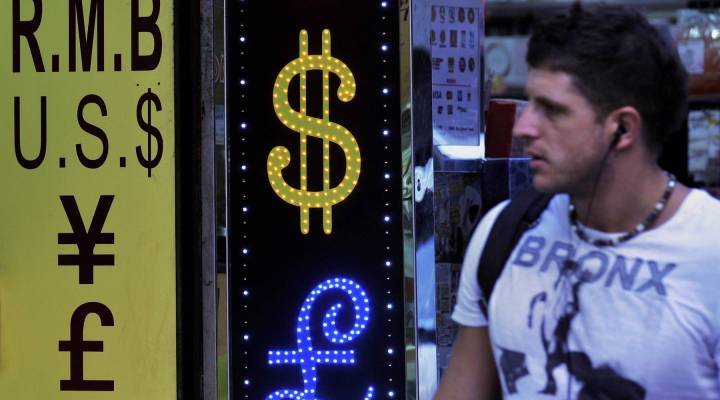 PODCAST: OPEC reaches a deal, iPads in the cockpit

COPY
The euro is weaker compared to the dollar, and that could mean more American tourists in Europe. LAURENT FIEVET/AFP/Getty Images
Mid-day Update

PODCAST: OPEC reaches a deal, iPads in the cockpit

The euro is weaker compared to the dollar, and that could mean more American tourists in Europe. LAURENT FIEVET/AFP/Getty Images
Listen Now

The Fed wrapped up a meeting yesterday saying the U.S. economy is expanding moderately but that trouble abroad — especially in Europe — still poses a risk.

And the euro currency has fallen to its lowest point against the dollar since January. It’s hovering around a $1.30.

The U.S. Senate’s expected to vote down an approved House measure extending the payroll tax cut. President Obama has threatened to veto that bill anyway because it also opens the door for an oil pipeline and spending cuts that Democrats oppose.

The oil cartel OPEC has agreed to a new 30 million barrel a day limit on output. The first new production limit in 3 years. That’s as the International Energy Agency says oil prices next year could make a sour global economy worse.

The Federal Aviation Administration says starting this Friday, American Airlines pilots will be able to use iPads in the cockpit even during take-off and landing. Those iPads will replace paper flight manuals. But the ban on passengers using devices such as iPads, phones, or anything with an on-off button will continue. And while you won’t be able to play Words with Friends during the beginning and end of a flight, we can only hope the pilots won’t be either.

What are the best words to use on your resume if you want to get a job? Well career social network LinkedIn has gone through its  member profiles and says the following are the most commonly used: Dynamic. Motivated. Track Record. Organizational. And creative is number one on the list.

And in today’s Mid-day Extra, we look at one way that Brits can make a little extra cash in the down economy.