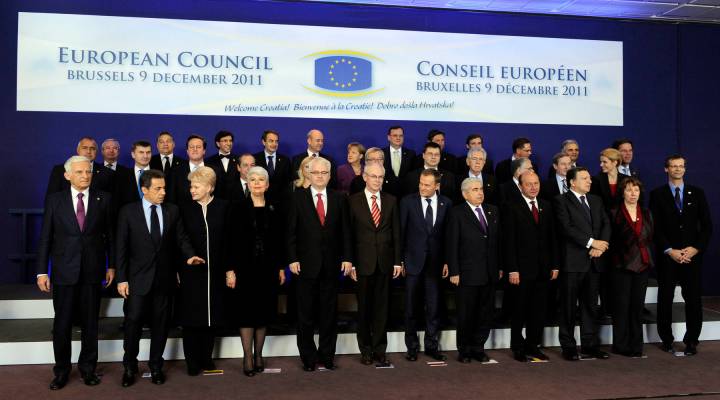 European Union leaders pose for a family picture during an European Union summit at the EU headquarters on December 9, 2011 in Brussels. JOHN THYS/AFP/Getty Images
Listen Now

EU leaders have been in an emergency meeting in Brussels today trying to get the 27 EU member states to agree to a plan to bolster the euro and rescue the Eurozone economy. Most countries did reach an agreement, including all the countries that use the Euro. But the U.K. did not sign on.

The gap between how much the U.S. imports and exports got smaller in October, thanks to Americans buying fewer foreign cars and importing less oil.

Toyota today lowered its earnings forecast for its fiscal year leading up to March, blaming a strong Yen — making its exports expensive, and the flooding in Thailand.

Wal-Mart says it has started an internal investigation into whether certain matters like permitting, licensing and inspections complied with the U.S. Foreign Corrupt Practices Act.

Food has become the hot new holiday gift — specifically Restaurant gift cards. They’re big business this year, expected to bring in around $9 billion dollars. People have been eating out less since the financial collapse and the cards give an opportunity for a nice night out. Top selling cards this season? Subway, McDonalds and Olive Garden. Well… unlimited breadsticks?

Five high level Chinese tax officials have been suspended from their jobs. The members were observed either sleeping or reading newspapers during a recent video conference. A lot of Chinese government bureaucrats have been criticized on recent blogs for corruption and ineffectiveness. And maybe those drowsy suspended workers weren’t paying attention to the training session they were in, which was focused on… stamping out laziness at work.