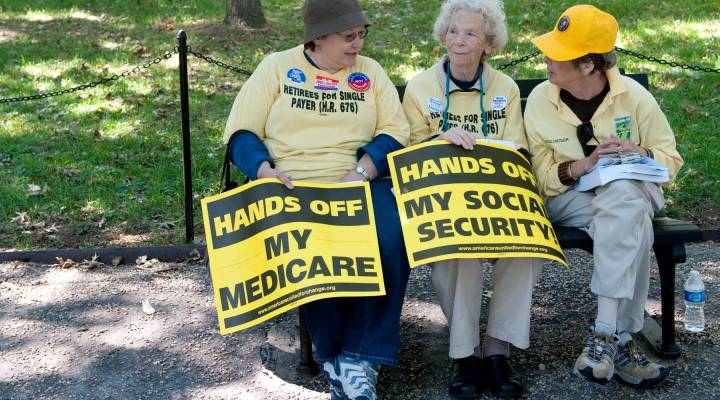 PODCAST: Waiting to exhale on Europe, the CFPB, and payroll tax cuts

COPY
Today is the last day of the year to enroll in a Medicare plan. SAUL LOEB/AFP/Getty Images
Mid-day Update

PODCAST: Waiting to exhale on Europe, the CFPB, and payroll tax cuts

Today is the last day of the year to enroll in a Medicare plan. SAUL LOEB/AFP/Getty Images
Listen Now

Shares of Citigroup fell a quarter percent. The banking giant announced plans to lay off 4500 workers over the next few months to cut costs.

Today the Obama administration, and the new Consumer Financial Protection Bureau, will announce plans to simplify what credit card companies tell cardholders about their interest rates and fees.

Stupidity and bad luck often make for a valuable life lesson. Last Saturday, a 22-year old Maryland man tried to shoplift more than $600 worth of video games from a local Wal-Mart. Store monitors watched the guy shove more than two dozen games down his pants. But when he went to leave, a throng of police officers tackled and arrested him in the parking lot. The store didn’t have to call the police. There was a community program going on at the store that day called “Shop with a Cop.”

Supreme Court TV could be coming to a basic cable package near you. Congress is reportedly trying to pass a bill that would require Supreme Court proceedings be televised Part of an effort to make the high court more transparent. Some justices have spoken out against the idea. But I think it could be a hit — the honorable Simon Cowell has a certain ring to it.

And in today’s Mid-day Extra, we look at what an induction into the Rock and Roll Hall of Fame means for an artist.