David Cameron not ready to agree on treaty changes

David Cameron not ready to agree on treaty changes

Stacey Vanek Smith: Treasury Secretary Tim Geithner is in Europe today pushing European leaders to take stronger action to prevent another financial crisis. After meeting with the French finance minister, Geithner said progress is being made. Still, a bailout from the European Central Bank would need a green light from all member states. And British Prime Minister David Cameron might be a tough sell.

The BBC’s Matthew Davies has more from London.

Matthew Davies: German Chancellor Angela Merkel and French President Nicholas Sarkozy seem to be very keen to re-write some of Europe’s treaties, bringing in in new rules for fiscal discipline which they hope will finally end the region’s woes.

But Britain’s Prime Minister, David Cameron, says that he won’t sign any new treaties that threaten British interests, including the profitability of London as a major financial centre.

David Cameron: When I go to Brussels I will be there to defend and promote British interests. We want the single currency crisis solved but we will protect and defend British interests at the same time.

If Mr.Cameron feels unable to accept a new European Union treaty, the 17 countries who actually use the euro currency may have to come up with yet another plan among themselves.

In London, I’m the BBC’s Matt Davies for Marketplace. 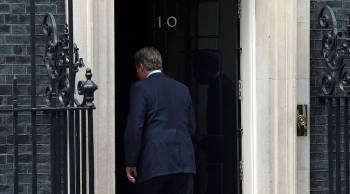 David Cameron sings his way out of his political career