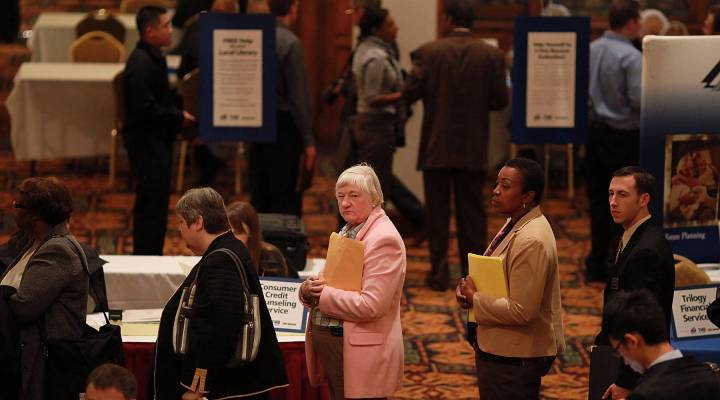 Kai Ryssdal: We’ll begin — as we usually do on the first Friday of the month — with the numerical basics. The Labor Department told us this morning the economy added 120,000 jobs in November. That’s good. It also changed its mind about the totals for September and October. More jobs were added those months than we thought — also good. A separate survey told us the unemployment rate fell almost half a percentage point to the lowest it’s been since early 2009. Yes, also good.

As always with the labor market, though, the basics are rarely enough. Marketplace’s Stacey Vanek Smith reports from New York.

Stacey Vanek Smith: Twenty-eight-year-old Jason Linker got laid off from his government job a couple years ago. He managed to stay pretty upbeat until he’d realized been looking for work for year with no luck.

Jason Linker: And it hit me that it had been that long. And for probably a month, I was feeling depressed and lazing about the house and doing nothing. It was such a horrible feeling to be so useless.

The good jobs report today, isn’t all good. More than 300,000 people say they’ve stopped looking for work — and are no longer counted as unemployed.

Tom Nardone is an economist with the Bureau of Labor Statistics.

Still, Nardone points out, the unemployment rate in the U.S. is now 8.6 percent, the lowest it’s been in more than two years. And some parts of the economy seem to be coming back to life, says Ken Goldstein. He’s an economist with the Conference Board. He says retailers are starting to add jobs — more than usual for this time of year. Goldstein says that could be a sign the long-time standoff is ending.

Unemployed Jason Linker resumed his job search and recently felt that momentum. He landed a health care job with the Maryland state government. He starts next week.

Linker: It feels tremendous. It feels really great to be part of the economy again.

As the job market continues to grow, economists hope some of the people who had given up the job search, will re-enter the fray.