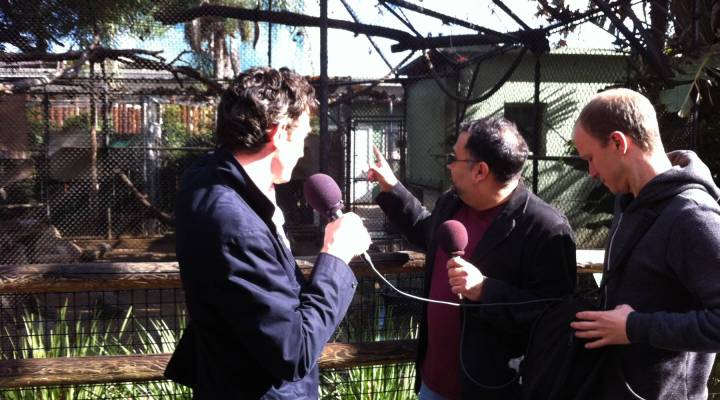 What is a ringfence?

What is a ringfence?

Steve Chiotakis and Paddy Hirsch at the zoo to explain ringfences. Mary Dooe/Marketplace

Steve Chiotakis: One plan European leaders have talked about containing the crisis is something called “ringfencing” — like quarantining those countries with the worst debt problems.

Marketplace senior producer Paddy Hirsch and I traveled to one place where ringfencing is nothing new.

Chiotakis: Oh man, we’re at the zoo! I love the zoo, Paddy. That’s a red-handed tamarin!

Hirsch: Yes it is, Steve. Don’t try and pet it, please. There’s a fence around it for a reason.

Chiotakis: Ah I get it — a “ringfence.” You’re telling me that European nations are like a bunch of wild animals?

Hirsch: No, I’m saying that in a zoo some animals have to be kept in their own enclosures, and in Europe right now, some countries need to be kept separate from the rest of the pack. The idea is to do that with a ringfence.

Chiotakis: To stop their problems from getting out and hurting the rest of us — right?

Hirsch: Right, but also so that they can get the specific care that they need. You don’t put the tiger in with the gazelles, do you?

Chiotakis: No you do not.

Hirsch: And not just because they might harm each other. A tiger’s needs are different to a gazelles.

Chiotakis: And Italy’s needs are different to France’s.

Hirsch: Right. So a ring fence around Italy is going to do two things: it’s going stop its problems infecting anyone else, and it’s going to give the Italian government the space it needs to mend the country.

Chiotakis: OK, I get the concept — but how would it work in practice?

Hirsch: Well let’s get one thing straight first. Italy is solvent right now. It is still making money. It does not need a bailout — at least, not yet. But if its borrowing costs keep rising, it will go bust.

Chiotakis: But how can it bring those borrowing costs down?

Hirsch: OK, so the borrowing costs are rising because no one wants to buy Italy’s bonds — because they’re worried it could go bust. That means Italy has to pay more and more in interest to buy new bonds. But if someone stepped in — say, maybe the European Central Bank — and said, we will guarantee all of Italy’s bonds, then people would be happy to buy them. The cost of borrowing would fall, and Italy would be solvent.

Chiotakis: Okay, so that’s the fence going up. How long would that bond guarantee have to stay in place?

Hirsch: Long enough for Italy to make real changes in the way the country runs. Italy has to cut its government spending, big time. It also has to put reforms in place that allow its companies to become more competitive and productive, and only then will its growth rate rise. Once those reforms kick in, and investors believe that Italy can handle its debt, they’ll stop treating it like some kind of dangerous animal that’s escaped from the zoo.

Chiotakis: All right, I get that. But let me ask you this: what zoo animal is Italy?

Hirsch: Well, people say Italy is kind of a hybrid of Germany and Greece, right — with the industrial north and the sunny south. So if German is a bear — you know, they like bears up there — and Greece was say, a sloth —

Hirsch: I’m sorry, mate. Anyway, somewhere in between those two extremes. So, maybe a baboon? You know flashing its red bottom at everybody, you know?