It’s Thanksgiving. For a lot of people that means turkey, stuffing, sweet potatoes and, of course, football. Three games are on the NFL schedule today, which means a good nine solid hours of hard hitting action. Sometimes, really hard hits. Like the kind that can rattle a player’s head to the point of concussion.

It happens a lot since you have a ton of large, strong, fast men smashing into each other at great speeds. Most NFL players will experience at least one concussion in their careers. It’s an injury that could lead to brain damage, depression, sleep and mood disorders, and a lot of other problems. There has been a lot more discussion of the serious long-term effects of concussions lately. Starting with these Thanksgiving Day games, the NFL will require each game to have a trained observer in the press box, monitoring players for symptoms of concussion.

The Illinois sporting goods manufacturer Riddell is a part of any discussion into how to protect players.  Most NFL players wear helmets from Riddell.

“We have a technology called HITS — it stands for head impact telemetry system,” says Thad Ide, Riddell’s vice president of research and development. “That technology uses sensors that are embedded in football helmets on the field. There are a number of research institutions that use this technology that collect impact data from on-field situations. Players’ helmets transmit that data back to the sideline and then we can mine that data later on to improve football helmets.”

The University of North Carolina football team uses the HITS system, monitoring action on the field so sideline staff knows what kind of impact a player is receiving.

“We’re using it as a research tool,” says Kevin Guskiewicz, chair of the Department of Exercise and Sports Science at UNC Chapel Hill. “But also to help guide return-to-play and to help modify behavior. I think that’s an important point to make, that a player who seems to show patterns of leading inappropriately with their head, using the helmet perhaps as a weapon, we’re able to pick that up through the system and show the cumulative impacts within the course of a week or a month and to try to change that player’s tackling or blocking behavior.”

The data collected by North Carolina was presented to the NFL and, says Guskiewicz, is partially responsible for the league’s decision to move kickoffs to the 35-yard line. That’s meant deeper kicks that get returned less often, leading to fewer high speed, high-impact collisions.

So has all this data led to fewer concussions over all? Not really, Guskiewicz says, “I think we’re seeing a trend nationally of reported concussion rates actually on the rise. And I think it’s important to emphasize the word ‘reported’ or ‘diagnosed’ because a lot of concussions in the past went unrecognized. The players didn’t realize they had a concussion or didn’t realize the importance of reporting it and with all the emphasis placed on this injury over the past five to ten years, we’re seeing an increase in reported concussions. At our school, it’s been fairly consistent over the past 10 years but we’ve been able to manage them better.” 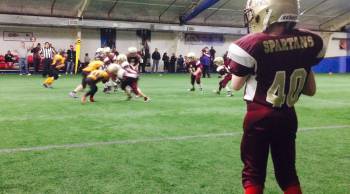