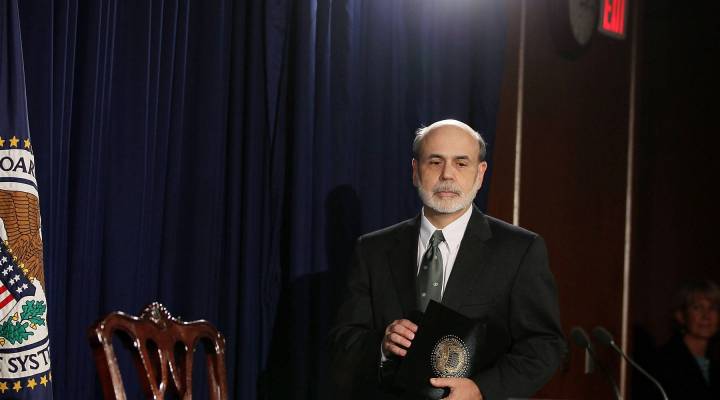 Germany — the biggest and strongest economy in Europe — had what’s being described as a disastrous bond auction this morning. The country tried to borrow about $8 billion from the bond markets, but could only sell about $5 billion worth. The Federal Reserve says it’s going to put American banks through new stress tests, to see how exposed they are to European debt.

The number of people who sought first time jobless claims nudged up last week. The Labor Department said today that number is still above the threshold of measurable job growth.

Consumer spending was up marginally last month, and the Commerce Department also reported today orders for big ticket items — washing machines and cars — fell for the second month in a row.

The Mortgage Bankers Association said this morning that more people applied for home loans last week. But purchase activity is still down 5 percent from last year — and that’s despite the average rate on a 30 year fixed mortgage… holding at 4.23 percent.

The chairman of the FCC has come out against the proposed AT&T- T-Mobile merger. An FCC analysis found the merger would lead to higher prices for consumers… and fewer US jobs.

AAA says 42.5 million Americans will be travelling to their Thanksgiving destinations.

In Cedar Falls, Iowa, there appears to be a real life Hamburglar. According to the Des Moines Register, a 21-year-old college student was hungry around 2 am on Sunday Morning and he went to McDonalds to get a burger. But they were closed. So he broke the window went inside and grilled himself up some hamburger patties and fired up the deep fryer to make some french fries. It’s all caught on video — though, curiously he was not wearing stripes like the real hamburglar.

My mom always calls them “senior moments.” I get ’em too — forgetting why I walked into a room to do something. Turns out researchers at the University of Notre Dame found there really is some psychology to it.  A doorway, the study says, is interpreted by the brain as an event boundary. And when people walk  through that doorway, the brain automatically files away what it was supposed to do, which explains why, upon entering the studio about ten minutes ago. I forgot what I was supposed to do. Until that big on-air light came on.  And here I am.

And in today’s Mid-day Extra, we look at why there are so many Republican debates this election season — and who can benefit.