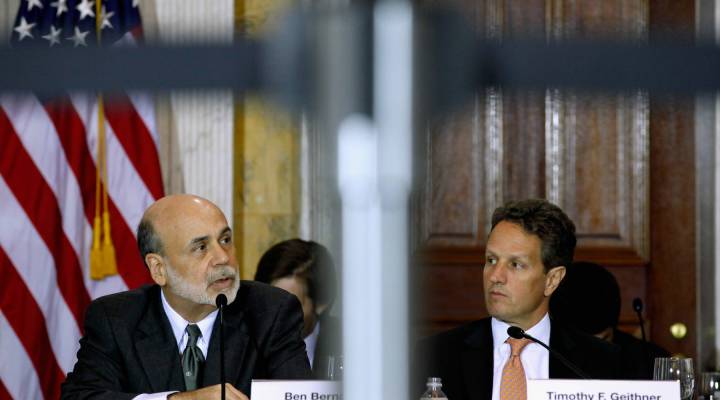 Kai Ryssdal: The obligatory turkey pardoning went down today at the White House. Liberty and Peace, each weighing in at 45 pounds, will live out their days at Mount Vernon.

There was also the obligatory presidential proclamation.

Barack Obama: Tomorrow is one of the best days of the year to be an American. It’s a day to count our blessings, spend time with the ones we love, and enjoy some good food and some great company.

2011 has been an economically trying year, more fits than starts. So we wondered, as they carve their turkeys tomorrow, what Ben Bernanke and Tim Geithner might be thankful for. Marketplace’s Stacey Vanek Smith ventured a guess.

Heartburn will probably be on the menu for Fed Chief Ben Bernanke and Treasury Secretary Tim Geithner this Thanksgiving. They’re not talking, but Harvard economist Ken Rogoff says the two officials have plenty to be thankful for.

Ken Rogoff: As miserable as things are and as high as unemployment is, it really could be a lot worse. We’re healing and hopefully the coming year will bring more of that.

The economy is growing — albeit slowly. Bernanke’s Federal Reserve has had a busy year: Buying U.S. Treasury bonds, pumping billions into the economy and trying to encourage people to borrow money by keeping interest rates low.

Jill Schlesinger: I think Bernanke is most grateful for low inflation.

Jill Schlesinger is editor of CBS Moneywatch and a former investment adviser. She says Bernanke couldn’t do any of that if inflation started up — that’s when the price of everything starts to climb uncontrollably and that’s a real risk when you add lots of money to the system.

Schlesinger: For Geithner, it’s all about, ‘I just don’t want the worst to happen again,’ and so far it hasn’t.

And that’s what Georgetown finance professor Jim Angel imagines Bernanke is grateful for.

And what about the eurozone? What can it be grateful for this Thanksgiving?

Angel: Oh, let me think about that one. At least we have good wine.