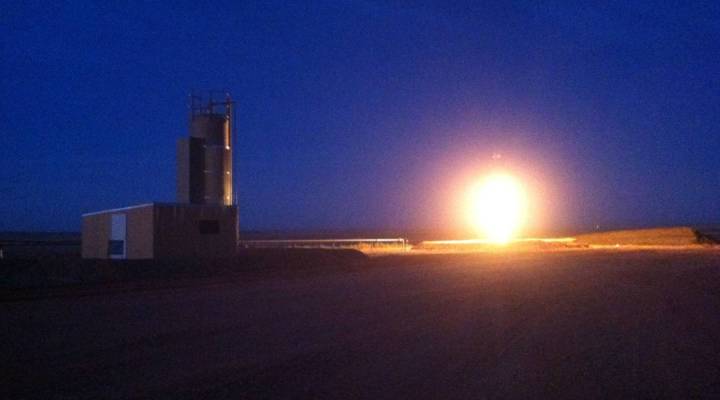 Kai Ryssdal: Remember when Alan Greenspan said we didn’t really have a housing bubble in this country, what we had was a whole lotta froth?

Stacey Vanek Smith: In most of the country, jobs are nowhere to be found and vacant houses are pretty much everywhere.

That’s not the case in North Dakota. Just ask Tom Rolfstad, head of economic development for the town of Williston.

Tom Rolfstad: I can almost get anyone a job here, probably the day they get here. But finding them a place to stay is a real challenge. We have people literally sleeping in trees and all kinds of things here.

The reason people are sleeping in makeshift treehouses?

A yellow flame soars into the night sky outside Williston. It’s natural gas burn-off from oil drilling. Fires like these fill the skyline in the northwestern part of the state. They mark one of the largest oil reserves in the world — and the hiring frenzy that’s happened since companies figured out how to tap the oil five years ago.

Lynn Helms is with the Department of Mineral Resources.

Lynn Helms: It has changed every business in almost every way. We’ve brought 24,000 jobs into North Dakota, just to service the drilling rigs.

Now every company from McDonald’s to Halliburton is desperate for workers. And those workers are desperate for a place to sleep. Many apartments have two-year waiting lists; RV parks are overflowing. Dozens of oil workers live in their cars in the parking lot of the local Wal-Mart. They join gyms just to have a place to shower.

Oil truck driver Derek Gerard lives in a trailer he towed from Idaho. He says the payout here is great — oil workers out here earn an average of $80,000 a year — but the life is hard.

Gerard: There’s a lot of turnaround because a lot of people can’t handle it. It takes toughness to go away from your family and your friends and come out and do work like this.

For many oil field workers, the best housing option is a “mancamp.” These temporary housing units line the road; they look collections of metal shipping containers. Manager Dennis Ripley shows me one of this camp’s 200 cramped rooms.

Dennis Ripley: So in here they have their own single bed, a captain’s type bed with the drawers underneath, closet and TV, DVD.

There’s a rec room, a gym and three really hearty meals a day.

Most workers eat all of that. The rooms cost $125 a day — oil companies usually foot the bill. Forklift driver Adam Martin is being put up here by his company. That is, until it finishes building a house for him and his wife.

Adam Martin: That was the agreement that I have with my company. That I come up here and they provide family living. Some people have a pocketful of money but nowhere to live.

Tony Hauck: Eighty apartment units and 12 duplex units. This is just an example of what our company has going and every other company around here is doing things similar to this.

Williston’s Tom Rolfstad is glad to see efforts like this. He worries that if the city relies too much on mancamps and RV parks, it will become town where people — mostly men — drift in for a couple of years to earn money.

Rolfstad: Our mission right now is to go more for family people who want to move here and be a long-term part of our community. So getting housing development going is big for us.

In the past, Williston added about five new houses a year. This year, it will get 2,000 new homes. And that’s still not even close to enough.