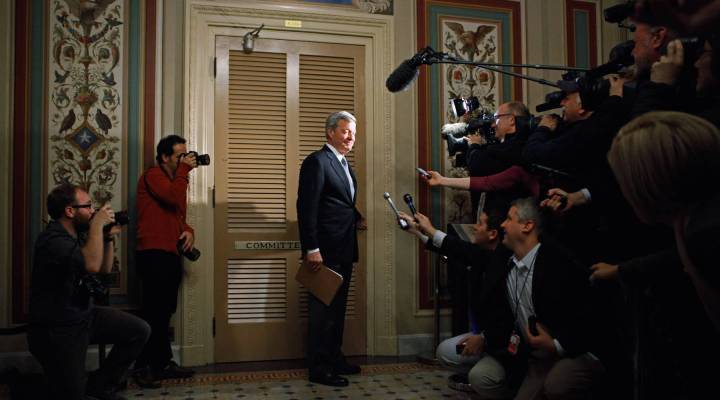 COPY
Senate Finance Committee Chairman Max Baucus (D-MT) is questioned by reporters as he arrives for a meeting with fellow members of the Joint Select Committee on Deficit Reduction, or 'Supercommittee,' in the U.S. Capitol November 18, 2011 in Washington, DC. Chip Somodevilla/Getty Images
Mid-day Update

Senate Finance Committee Chairman Max Baucus (D-MT) is questioned by reporters as he arrives for a meeting with fellow members of the Joint Select Committee on Deficit Reduction, or 'Supercommittee,' in the U.S. Capitol November 18, 2011 in Washington, DC. Chip Somodevilla/Getty Images
Listen Now

Today, Arizona Republican and Congressional super committee member John Kyl said talks were still going on. But there’s not a whole lot of optimism  to reach a deal to make big budget cuts.

The number of Americans who bought previously occupied homes rose slightly last month but remained at depressed levels. And more deals are being canceled at the last minute, a sign that even those who are in the market for homes are nervous.

In Spain over the weekend, voters elected conservative Mariano Rajoy as the country’s new leader. And he’s promising to make tough budget cuts to get a grip on the country’s debt problems.

Later today, computer hardware giant Hewlett-Packard will report its earnings. The first for the company with former eBay chief Meg Whitman at the helm.

The largest American meatpacking company Tyson Foods said this morning its profit was cut in half last quarter. The company blames the high price of chicken feed — for eating into its poultry profits.

The new Twilight movie brought in $139 million over the weekend. That happened even though this particular movie was panned by reviewers. One said: “I’ve had mosquito bites that were more passionate than this.”

President Obama’s set to sign a bill today that would create tax breaks for companies that hire unemployed veterans.

To Alabama, which recently passed a tough new immigration law that requires police officers to check a driver’s immigration status on routine traffic stops. Well last week, an officer did just that after pulling over a driver whose rental car was missing a license plate. The man was German, and only had a German photo ID, so he was arrested. Well it turns out — he was an executive from Mercedes Benz, which employs more than 4,000 people at  a plant near Tuscaloosa. Long story short… he wasn’t deported.

Worried about how secure your password is on your computer? There’s a new list out that tells you what words to avoid. Computer application firm SplashData compiled its list of the 25 worst passwords of 2011. Obviously it’s gonna be easy to figure out a password that’s 1-2-3-4-5-6-7. Or A-B-C-1-2-3.  SUNSHINE and I LOVE YOU also made the list. Those are really sweet — and apparently hazardous to your computer. But the password that’s easiest to figure out is… PASSWORD.

And in today’s Mid-day Extra, we hear an extended interview with Congressman Xavier Becerra, a member of the super committee.