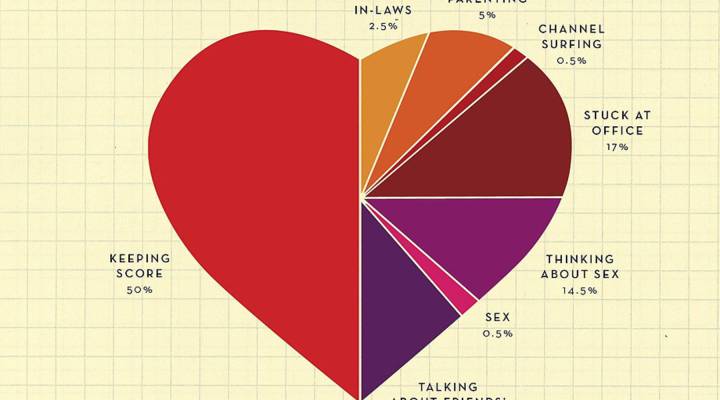 The dismal science of love and marriage

The dismal science of love and marriage

Tess Vigeland: We’ve had Freakonomics, Emotionomics, and earlier this year, we learned a new one — Spousonomics. It’s the idea that every marriage should be treated like the business partnership that it is. Behavioral finance for the bedroom and beyond.

Paula Szuchman and Jenny Anderson wrote the book on Spousonomics and I first spoke with them about it back in February.

Vigeland: So what made either of you think that the dismal science had anything to say about romance?

Paula Szuchman: Isn’t it obvious? Well actually, it’s called the dismal science, but technically economics is the study of the allocation of scarce resources, which we kind of find has incredibly apt parallels to marriage. Because what are we doing if not trying to allocate time, money, patience, energy, libido?

Jenny Anderson: I was going to pipe in with that one.

Szuchman: Yeah. And it used to be easy to allocate it all when it was just one person, and then suddenly it’s two people, and then maybe there’s kids and it’s even more people, and it’s a real challenge. So economics actually seems apt.

Vigeland: Well, all kinds of terms pop up in the book: Moral hazard, division of labor. And you have examples in the book of couples who basically keep bar graphs in their heads of who’s doing what in the house and whether things are fair. I can’t relate to that at all.

Anderson: Neither can we.

Szuchman: Neither can we.

Anderson: I think everyone does some score keeping. That’s the problem.

Vigeland: No, no. Never, never. But you use this example of doing the dishes to illustrate an economic concept called “Comparative advantage: specialization.” Tell us about the dishes.

Anderson: The issue really is what are you better at vis-a-vis the other chores, so it’s just trying to divide up everything. So if I’m a little bit faster at doing the dishes, but a lot of faster at doing the laundry, then I should definitely do the laundry and you should do the dishes. And you can change it up. This isn’t a recipe for you have to do the dishes for the rest of your life. But when you sort of look at the tasks that need to be done, you need to sort of be a little bit more tactical about who does what and think a little bit more about who’s better at what. And with those free hours, let’s get back to the business of being romantic and being in love because thank God the damn dishes are done.

Vigeland: Well let’s talk about that extra leisure time, because you spend an entire chapter talking about supply and demand, or how to have more sex. And I guess it’s pretty easy to figure out where the supply and demand come from here. But you start the chapter with a bar graph!

Szuchman: We just thought that would really grab people who wanted to know about sex, is a nice bar graph.

Vigeland: So tell us about the cost-benefit analysis here. You say that the key to more sex is lowering the cost of it. But we are not talking about what it sounds like we’re talking about.

Szuchman: Right. We are not saying pay less. I mean, if you pay your spouse for sex, then that’s your business and that’s fine.

Anderson: And you need more than our book to help you, I think.

Szuchman: Or maybe you’ve got it all figured out, I don’t know.

Anderson: The basis of the supply and demand is that lower costs and demand goes up. So the argument is make it cheaper for yourself and make it easier for yourself. We talked to so many couples who said by the time I get home, we put the kids to bed, we make dinner, we’re on our Blackberries, have to go back, maybe answer a few more e-mails, we get in bed, and it’s like ugh, just want to watch Jon Stewart and go to bed. A lot of couples have found creative solutions for making it easier for themselves. One couple set a goal. They said we’re going to have sex three times a week for the next whatever it was.

Anderson: Yeah, Operation Hat Trick, which is three goals in ice hockey. And they did it and what they found is they didn’t have amazing sex. They had sort of mediocre sex, but they had a lot of it and they would be the first people to tell you that a lot of mediocre sex is better than no amazing sex. And that seemed to be the goal. We’re all waiting for sort of a big chunk of time so we can have amazing sex and then expectations are high and you sort of have to think about it and then people are more intimidated by it. Whereas if it’s just, let’s just cut out some time maybe before dinner when we’re not so tired. Make it easier for yourself and maybe you’ll have a little bit more sex.

Vigeland: Well you are both relative newlyweds. So let me ask each of you: Is there any problem or conflict in your marriage that economics has not been able to remedy, Jenny?

Anderson: I think my husband would answer my tone of voice. I don’t know that economics has been as effective as we would like it to be. I wrote a chapter on incentives and clearly nagging and punishment and sort of making someone feel terrible is not a particularly productive incentive to get what you want. And yet I find myself at times not taking that to heart. I hope I’m a little better at it, but I’m sure he would concur that my tone of voice is not as spousonomical as he would like it to be.

Szuchman: I would say this idea that we talk about in the book about not flooding your partner with information. I’ve tried and I’m better at it, but not completely great at when I get upset about something not listing a bunch of other things that happen to be upsetting me at the same time or a bunch of other things he’s done. As you can tell, I’ve kind of lost my voice, and he was like, “Oh my god, this is like the fantasy life for me, can’t even speak.” I was like, “Enjoy it while it lasts my friend because in a couple of days I’m going to be back in action.”

Vigeland: Guys, it’s been awfully fun. Loved the book. Thanks for coming in.

Szuchman: Thank you for having us.

Anderson: Thanks a lot.