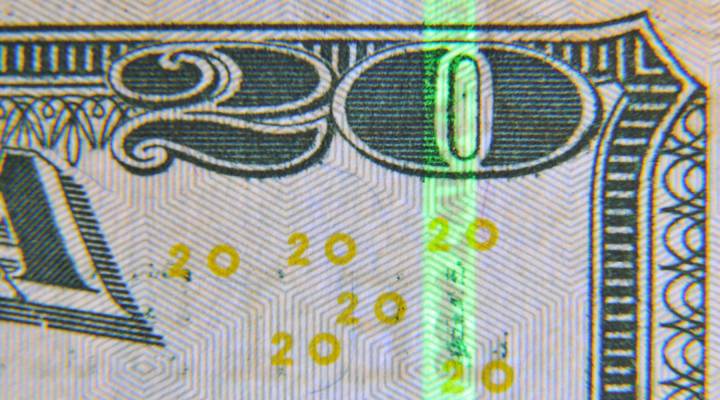 A close-up of the front of a U.S. 20-dollar bill lit with an ultra-violet light. $20 was the weapon of choice for a "cash mob" in Cleveland. Paul J. Richards/AFP/Getty Images

A close-up of the front of a U.S. 20-dollar bill lit with an ultra-violet light. $20 was the weapon of choice for a "cash mob" in Cleveland. Paul J. Richards/AFP/Getty Images

Tess Vigeland: If we’ve learned anything from the rising tide of anger over various aspects of the economy, it’s that consumers still have one element on their side: Choice. No one’s telling you where to park your money or spend your money. And you can have an influence just by taking your dollars elsewhere.

This week, a group of citizens in Cleveland banded together to make their own point. They took the concept of the flash mob — those coordinated sing-a-longs in mall food courts — and turned it into a buy-local effort they called a “cash mob.” Wednesday night they targeted a locally-owned store and mobbed it with $20 purchases.

Bull: Well, like I said Tess, there’s no music or dancing and there’s certainly no rumble going down. People use social media like Twitter or Facebook to gather at a mutual meeting place and then they target a local business with $20 in hand.

Vigeland: Now, I understand that you accompanied a cash mob this week in Cleveland. Tell us about it.

Bull: Roughly three dozen people showed up in a part of Cleveland called Tremont. And here’s one of the organizers, Andrew Samtoy:

Bull: And then without further ado, the cash mob went down to Visible Voice Books, that’s a local independent bookstore. And waltzed right in, waving little green portraits of Andrew Jackson.

Bull: And within minutes, the checkout counter was manned by four people, catering to a Wednesday night crowd. They said it was about four times bigger than normal.

Cashier: You can stick a bookmark in there for him.

Vigeland: So Brian, let’s talk about why this place was specifically targeted by the cash mob. Obviously, it’s local. But there most be more than one local store there, so how did they pick this one?

Bull: The cash mobbers I talked to said that they target small, independent businesses that give back to the community somehow. And the Visible Voice holds readings, socials, it’s regarded as a pretty valuable community resource there in the Tremont area. And it’s nothing, they say, against the big box stores. They just feel like these smaller independent businesses are the backbone of Cleveland’s economy. Here’s owner David Ferrante:

David Ferrante: On one level, you got a situation where you’ve got people taking the idea of a cash mob or a mob, which in this town has some negative connotations attached to it, and they’re turning it around to a positive thing. But the underlining piece of it is the fact that he’s really trying to build exposure for independent, non-corporate operations. Because, you know, the mom-and-pop stores like this, they really add to the diversity of the city and the neighborhood.

Bull: I should add too, Tess, while $20 was the set amount to spend on this cash mob, no one was limited to that. So as I learned from cash mobber Cynthia Boncella:

Cynthia Boncella: I got two great books. One just called out to me. It’s called “The American Nerd.” And the other one is a book called “The Marriage Plot,” which is by the author who did the “Virgin Suicides.”

Bull: If I might ask, how did that come up to?

Bull: And I’m sure Visible Voice is OK with.

Boncella: I’d assume they would be too.

Vigeland: So Brian, this is really all about giving people a chance to use their money in a constructive way, in a way perhaps that could help out some local businesses in this tough economic era. And I assume that the hope is that this kind of thing could spread like the Occupy Wall Street movement?

Bull: I think you’re right Tess. The organizers here in Cleveland say they plan to have another one in early December. And they also add that people in San Diego, Houston, Portland, Ore., Cincinnati and even London over in the U.K. have contacted them, asking how they can set up cash mobs in their very own cities. I think people are drawn to an activity that’s really helping small businesses recover from the recession. One economic think tank here in Ohio released a report that projected that holiday retail sales are going to go up a modest 3 percent, compared to last year. But still, you know, during the holiday season every little bit helps. So, I think just kinda tying into the whole Occupy Wall Street movement and being able to go non-corporate and support local businesses, per se, this is probably just the beginning I think.

Vigeland: All right, Brian Bull, joining us from station WCPN in Cleveland. Thanks so much.