The future of U.S. manufacturing

The future of U.S. manufacturing

Jeremy Hobson: In just a few hours, the government will tell us how things are going at America’s factories. And it might give us an idea of just how much we can rely on the American manufacturing sector for job growth. For years, the real action in manufacturing has been in emerging countries — especially in Asia. So is the manufacturing sector a place to look for jobs — well-paying jobs — in this country?

Hobson: So is manufacturing a place that we can really look for jobs in the future, or is dead or dying in this country?

Brancaccio: Well its stereotype is that it’s gone, right? All the jobs have gone somewhere else? Actually, 10 million Americans work in manufacturing now, and here’s the news of the week: A new report (PDF) calculates that there will be three million openings in manufacturing between now and the year 2018, which is not chicken feed.

Hobson: And that’s three million new jobs — these are jobs that are being created?

Brancaccio: Not really job creation; that’s the trick here, Jeremy. It’s more like job — what should I call it? — rotation. The main reason for these three million openings is because a lot of people currently working in manufacturing are boomers — baby boomers. And they’re going to hit retirement. The actual number of jobs is actually down over the next 10 years. But still, lots of opportunity as the older folks get out of there.

Brancaccio: Right, remember, you could get out of high school and you could maybe find a job as a machinist that would pay OK, $42,000 a year or something like that.

But I talked to Anthony Carnevale, the director of the Center on Education and the Workforce at Georgetown. The current situation is like this:

Hobson: So what needs to be done, David? How do we move forward in the world of manufacturing in the United States?

Brancaccio: It’s the fourth largest sector in the economy, manufacturing, and Carnevale said this:

Carnevale: The fact that there are so many jobs there means you just don’t walk away. It really is the industry that’s too big to fail, not Wall Street.

So he’s not suggesting a bailout, but some kind of government incentives, of the sort that we give for instance to the energy industry.

Hobson: Marketplace Economy 4.0 correspondent David Brancaccio, thank you so much. 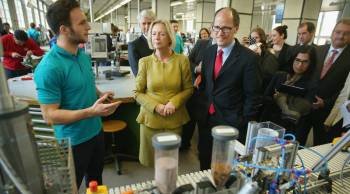