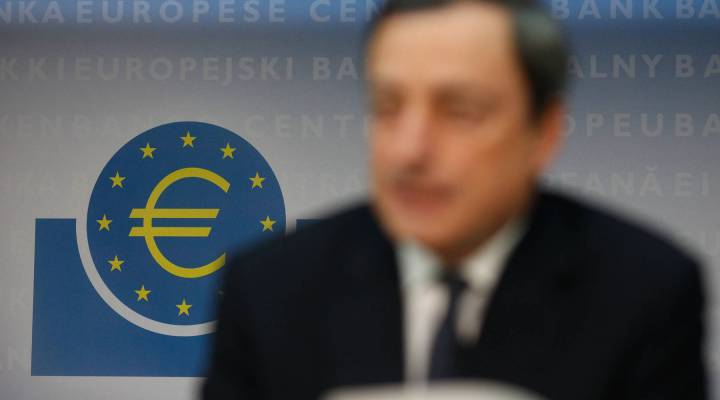 Can the ECB save Europe?

Mario Draghi, new president of the European Central Bank (ECB), speaks to the media following the first meeting of the ECB Governing Council with Draghi at the helm on Nov. 3, 2011 in Frankfurt am Main, Germany. Ralph Orlowski/Getty Images

Can the ECB save Europe?

Mario Draghi, new president of the European Central Bank (ECB), speaks to the media following the first meeting of the ECB Governing Council with Draghi at the helm on Nov. 3, 2011 in Frankfurt am Main, Germany. Ralph Orlowski/Getty Images

Kai Ryssdal: Let’s remember Europe is going through a debt crisis, much like our crisis was three and a half years ago. The temptation is to believe that the European Central Bank is going to do like our central bank did back then: Step in and buy trillions of dollars in bad bonds to backstop the whole financial system.

Herman Schwartz teaches political economics at the University of Virginia. He says the Fed is supposed to protect the value of the dollar — and keep unemployment low.

Herman Schwartz: The Fed has been much more aggressive about putting money into the economy in order to keep unemployment from rising to catastrophic levels.

To the European Central Bank, unemployment is not an issue; its sole mandate is to keep the euro stable. So if the ECB bought trillions of dollars of Greek or Italian bonds, that might help those economies, but it would probably drive down the value of the euro.

Michael Farr heads bond investment company Farr, Miller and Washington. He says even if the ECB wanted to go on a bond-buying binge, it probably couldn’t.

Michael Farr: Our central bank pretty much, in many ways, omnipotent when it comes to creating money. Europeans are not.

The Fed gets its money from U.S. banks. When it uses that money to buy bonds, it’s trying to help a single economy: America’s.

The ECB gets its money from banks in 27 different countries — mostly from Germany. So if the ECB buys Italian bonds, that happens at Germany’s expense.

Farr: We have people on Occupy Wall Street or on the Tea Party who say they don’t want taxes to pay the bills to bail out our banks. Well, you can imagine how complicated it would be if we were bailing out the banks of another country.

Right now, says Farr, the ECB appears to paralyzed by conflicting interests. If the solution is for Europe’s central bank to act more like the Federal Reserve, the European Union would have to look a lot more like the United States of Europe.