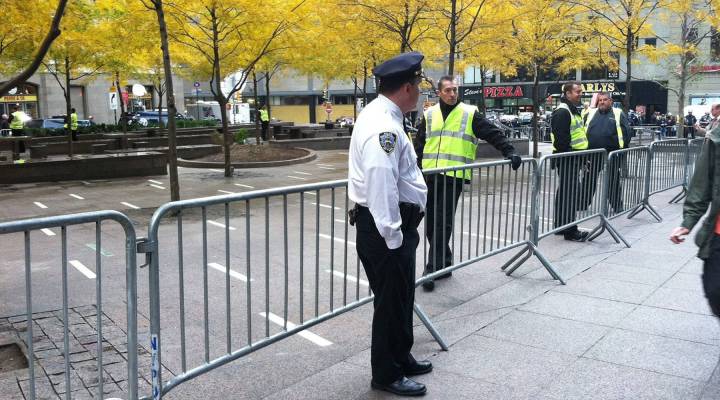 COPY
Zuccotti Park after it was cleared by police this morning and cleaned up. Stacey Vanek Smith
Occupy Wall St.

Zuccotti Park after it was cleared by police this morning and cleaned up. Stacey Vanek Smith
Listen Now

JEREMY HOBSON: At 1 o’clock in the morning New York time, police in riot gear raided Zuccotti Park in Lower Manhattan. That’s the original site of the Occupy Wall Street movement and demonstrators have been camped out there since September. New York City Mayor Michael Bloomberg says the protesters will be allowed back in after a cleaning– but with no tents or tarps.

Marketplace’s Stacey Vanek Smith is with us now from New York with the latest. Good morning.

HOBSON: Well, I understand you have left Zuccotti Park and moved to where the protesters have gone. Where is that?

VANEK SMITH: It’s Foley Square — it’s just northeast of Zuccotti Park, right in front of City Hall. And a protest has gathered here and a march is planned to leave at 8 a.m., although protesters are planning to go back to Zuccotti Park at about 8:30.

HOBSON: Now, Mayor Michael Bloomberg of New York issued a statement explaining the eviction of the protesters from Zuccotti Park and he said, “Protesters have had two months to occupy the park with tents and sleeping bags, now they will have to occupy the space with the power of their arguments.” What’s the reaction been from protesters?

VANEK SMITH: Well, the protesters I’ve spoken with have been pretty upset, I think they were very shocked at being ousted. I spoke with one man, Chris Porter — he was one of the last forty people out of Zuccotti Park this morning, he was on the sanitation committee in Zuccotti Park. And he told me that they’re not going to let this discourage the movement and that they’re going to regroup.

VANEK SMITH: So right now, there’s a march planned at 8 a.m. from Foley Square, and also some protesters are going back to Zuccotti Park later this morning.

HOBSON: Now, Stacey, police have been evicting other occupy protesters in other cities across just in the last couple of days in Portland, Ore., and Salt Lake City, and in Oakland, Calif. Can the protests continue without these camps?

VANEK SMITH: Well, that’s difficult to say. Certainly, winter’s on the way, which will make things difficult. The protesters sound very determined, but we’ll just have to wait and see if the protests can continue without the presence of tents and other shelter.

HOBSON: Marketplace’s Stacey Vanek Smith joining us from Foley Square in New York, thanks a lot. 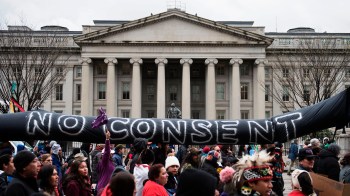