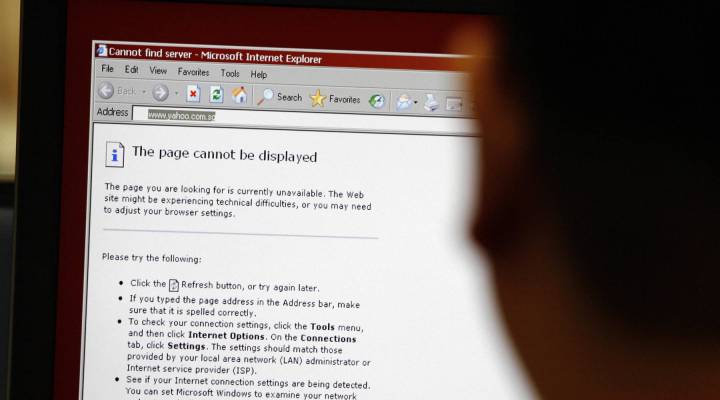 Why your Internet connection is so *#$@!’ slow

An Internet surfer is seen after having failed to access a website. ROSLAN RAHMAN/AFP/Getty Images
Daily Pulse

Why your Internet connection is so *#$@!’ slow

You may not have heard of back-to-dialup delay syndrome (BDDS) before (OK, I just made it up), but I’m willing to bet that everyone who reads this has experienced it at one time or another.

BDDS is what happens to you in the evening when you’re trying to stream Marketplace on KPCC or watch The Only Way is Essex on Hulu and the Interwebs lock up on you. It’s like being stuck on the 110 North at rush hour: you jerk forward a bit, then stop, jerk forward, stop, jerk forward …

When I’m afflicted by BDDS, I usually curse out loud, bash the table with my clenched fist and then go and make a cup of tea. And while I’m brewing up, I usually ask myself what the heck everyone is doing online at that time? Is everyone on Hulu? Is that the problem?

A new report out from a research company called Sandvine says that’s exactly the problem. During peak hours, which Sandvine says is between 8:45 p.m. and 10:45 p.m., 53.6 of Internet users are streaming entertainment. Only 16 percent are browsing and just 15 percent are sharing media with each other. Social networking? A mere 2.1 percent.

It was always obvious that entertainment streaming companies were going to be huge bandwidth hogs, but it turns out that the most gluttonous piggy of all is none other than Netflix. It sucks up a stunning 32.7 percent of all the downstream traffic during peak hours.

This study reminds me of similar research conducted during the Internet boom of the early 2000s. As online access improved, usage surged, and BDDS became chronic. Companies found that while they had good business models in principle, there simply wasn’t enough bandwidth to meet demand from consumers. Many of these companies collapsed as a result.

The Sandvine report raises the possibility that history could repeat itself. It noted that subscribers to online content providers are concentrating their Web activity within an increasingly narrow slice of time.

“This shift in behavior is a worrying trend for providers, who must engineer their networks for peak bandwidth. If we assume that a subscriber’s perception of value is directly tied to his or her monthly usage, then this trend means that it now costs more for service providers to deliver a constant value to the end consumer, and the network itself is increasingly inefficient.”