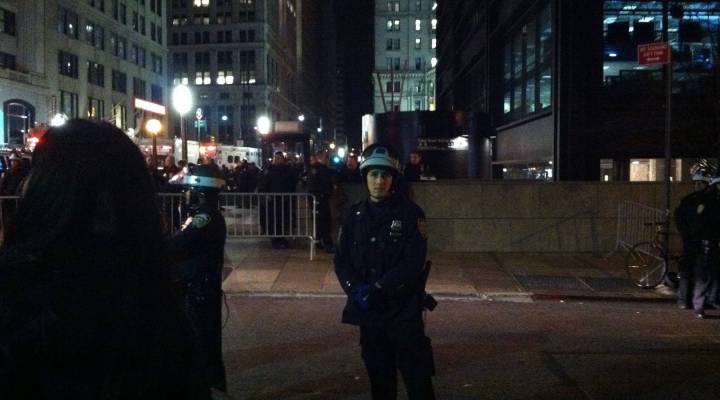 On the scene as Occupy Wall Street is evicted

On the scene as Occupy Wall Street is evicted

A cop stands by as protesters are evacuated in New York. Stacey Vanek Smith
Listen Now

Jeremy Hobson: We’ll start at the original site of the Occupy Wall Street Protests: Zuccotti Park in New York City. Demonstrators have been camped out there since September, but at about 1am New York time, the park was cleared
out by police. They say they need to clean the park, and that protesters will be allowed
back in — but without tents or tarps.

Marketplace’s Stacey Vanek Smith is live with us from Zuccotti Park with the latest. Good morning Stacey.

Hobson: So what’s it like down there? Describe the scene.

Smith: Well Jeremy, as you know from having been down here yourself, Zuccotti Park was really a vibrant place with tents and a library and a kitchen — I mean, it was really like a little city.

Smith: It’s been completely cleared out now, completely barricaded off. There are police in riot gear everywhere, and protesters are slumped on the sidewalk, I think regrouping and figuring out where to go next.

Hobson: And I know that there are some reports that they have regrouped in some of the other places in lower Manhattan. What are the protesters saying right now to you, Stacey?

Smith: Everybody’s still pretty upset and shocked, I think. I spoke with Anson Allsights, who watched the park getting cleared and a lot of people’s belongings getting thrown away. Here he is:

Anson Allsights: Well, I mean, I saw them just throwing away all of the tents. They’re just taking everything that was left in the park and throwing it away. Apparently the people did not have enough time to remove their valuables — a lot of the equipment, all of the tents are in the dumpster now.

Protesters got fliers from police saying that the protest had become a health and fire safety hazard.

Hobson: Stacey Vanek Smith of Marketplace. She’s live with us from Zuccotti Park in New York. Thanks Stacey.