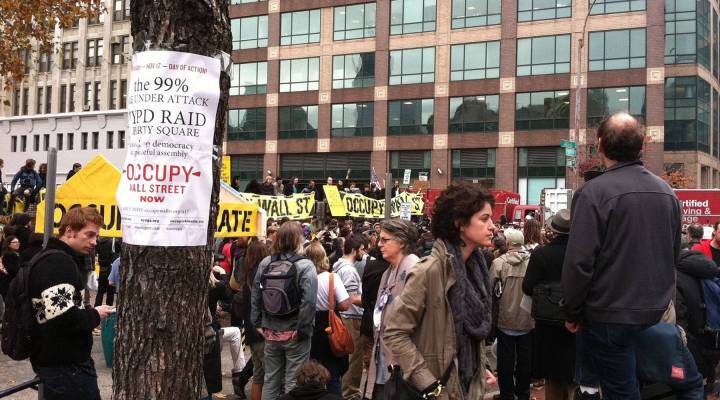 Italian borrowing costs shot back up again, above that crucial 7 percent interest mark for the 10-year bonds. That’s the level at which other euro countries have needed to be bailed out because it’s too expensive for them to borrow money.

The office supply chain Staples said this morning it’s being hurt by the debt crisis in Europe. Global sales were down more than 1 percent for the company last quarter, thanks to a 12 percent plunge in Europe.

Meanwhile, the world’s largest retailer, Wal-Mart, said this morning that its earnings were helped by U.S. sales which were up 1.3 percent last quarter.

The Commerce Department said retail sales jumped a half percent last month. That’s a good sign for the retail sector as we head into the biggest shopping day of the year next Friday.

Wholesale prices were down for the first time in 4 months. Companies paid less in October for gas, new cars and other goods, meaning inflation isn’t as much of a concern at least for now.

U.S. business inventories failed to increase in September for the first time since December 2009, a government report showed on Tuesday, pointing to a downward revision to the third-quarter growth estimate.

Official figures show that the 17-country eurozone’s economy grew by 0.2 percent in the third quarter of the year despite a raging debt crisis.

Defense Secretary Leon Panetta and other top military leaders will appear in front of a Senate panel today to answer questions about military spending cuts and the troop withdrawal from Iraq.

The NBA lockout continues with no end in sight. And some NBA players with a little extra time on their hands have turned to activities that have nothing to do with basketball. According to the Wall Street Journal, Carmelo Anthony of the New York Knicks has been doing some acting – on Law and Order SVU and Nurse Jackie. Michael Beasley of the  Minnesota Timberwolves has taken up ballet. And Drew Gooden of the Milwaukee Bucks is scouting locations for a chicken wings franchise — which aims to take chicken wings to a whole new level.

And in today’s Mid-day Extra, we speak to Henry Abbott of the True Hoop blog, about what the future holds for the NBA.

Some residents of New York City — whose homes are a stone’s throw away from Times Square — are complaining about a new electronic billboard that’s gone up. It’s a 6,000 square foot digital TV screen on the city’s Port Authority Building. And those flashes shine right into the living room of one woman who says the light keeps her awake and her cats on edge. She and her neighbors are trying to convince the authority to dim the lights at night, or even shut the sign off after dark. Or face the prospect of leaving the quiet and tranquil atmosphere of Times Square.