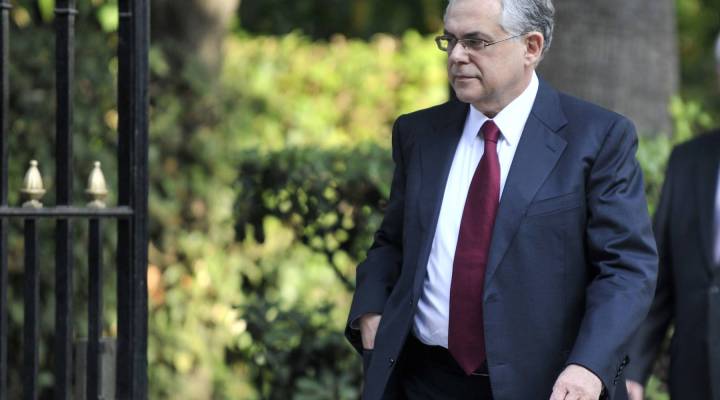 Greece has a new Prime Minister-to-be. Lucas Papademos is a former Harvard University professor, and served as vice president of the European Central Bank. Papademos says he wants Greece to continue to use the euro and not get kicked out of the eurozone. But there are critics who say if Greece isn’t removed, the debt crisis will keep spreading. And in Italy, an economist named Mario Monti looks likely to head the next government there.

The average rate on the 30-year fixed mortgage fell below 4 percent for just the second time in history.

Fewer people claimed jobless benefits last week, according to the Labor Department. That number was down 10,000 to 390,000, closer to a threshold that indicates some job growth in this country.

The U.S. trade deficit unexpectedly shrank in September to its narrowest level since December on record-high exports, while the flow of imports from China slowed.

The Census said today that for the first time since tracking began in the 80s, a majority of new mothers are getting paid maternity leave.

To the Occupy protest in Denver — the city’s mayor asked the demonstrators to elect a leader, who could be a contact for police when things get tense. The Occupy movement has resisted such calls before, but the Denver protestors protestors obliged and nominated a three year old border collie Named Shelby. One supporter explained the decision, quote: “Shelby is more of a person than a corporation is, and less corrupt than most people. She is the youngest, first, and only dog leader of this revolution.”

Sometimes things just work out for the best. And by Best, I mean Best Buy. The electronics retailer was interviewing someone for a job at a store in Pennsylvania. But the manager decided not to hire the 23-year old — something told him he wasn’t the right person for the job. Turns out, on the very same day of his interview… surveillance cameras caught the job applicant stealing an XBox system by shoving the game console down his pants. Pretty smart guy. Except — oh yeah, he had just applied for a job! And on that application, was his address, where police arrested him two days later.

And in today’s Mid-day Extra, it’s a double feature! We hear extended interviews from both New York Attorney General Eric Schneiderman and the former CEO of Olympus, Michael Woodford.