Biden walks a line on pursuing cybercrime and maintaining liberties

Biden walks a line on pursuing cybercrime and maintaining liberties

The Vice President spoke via remote connection at that same conference in London yesterday. He said, “The rights of individuals to express their views and petition their leaders, practice their religion, assemble with their fellow citizens online we believe must be protected. These rights are universal whether they’re exercised in the town square or on a Twitter stream.”

That could be interpreted as disapproval of British PM David Cameron’s response to the recent London riots where he considered cutting off access to Twitter and Facebook as a means of curtailing protestors’ ability to coordinate.

He also talked tough on cybercrime. From Hillicon Valley:

But he said countries must work together to address cyberthreats. The U.S. is working to reach an agreement with Russia that would expand communications between computer security teams and nuclear response centers in the event of a nuclear incident, Biden said.
He said the U.S. is investing more in cybersecurity and in fighting transnational crime by helping other countries build up their law enforcement capabilities. 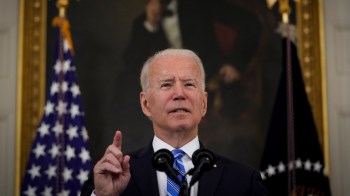