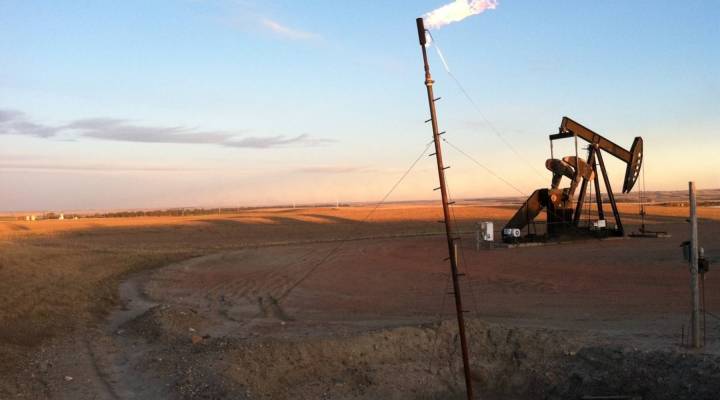 KAI RYSSDAL: Imagine if you can, a place where the labor market is fairly humming right along. Where the unemployment rate is right around 3 percent. Where if you want a job, you can have a job. Where — truth be told — companies are desperately trying to find people to work. Such a place does exist, you know.

We sent Marketplace’s Stacey Vanek-Smith to find the secret of North Dakota’s success.

STACEY VANEK-SMITH: You can tell the second you get there, North Dakota is not like other places. Actually you can tell before you get there. Flights are really expensive, like whisking off to Paris expensive. And if you can find a hotel room, make that a motel room, it can run as high as $600 a night. Roads and highways are choked with semis. There are “We’re Hiring” signs everywhere and you hear a lot of this:

Williston is in the remote, northwestern corner of North Dakota. Not a lot out there: the badlands, rolling waves of grain and, oh yeah, one the largest oil resources on the planet, which is pretty much what’s behind all this madness.

Lynn Helms directs North Dakota’s Department of Mineral Resources. He says the oil is 2 miles down and locked inside rock. To get it, they use fracking — fracturing the rock and then pushing water through the cracks to extract the oil. They figured out how to apply the technique in North Dakota about five years ago.

HELMS: That changed our largest resource that contains around 400 billion barrels of oil into an economically producible resource for the state.

Oil companies raced to North Dakota and suddenly Helms went from processing about one oil drilling permit a week, to about 20 per day. And every one of those permits means jobs. In the last few years, North Dakota has added 35,000 oil jobs. The State’s Entire population is only 630,000, which is why, pretty much overnight, North Dakota found itself dealing with a massive labor shortage. One Halliburton executive even went on Jim Cramer’s “Mad Money” show on CNBC and begged workers to come.

JACK DALRYMPLE: I say, this is Gov. Jack Dalrymple, would you please come to North Dakota? We have 15,000 job openings in every field imaginable.

North Dakota’s tax base is so big, there’s money to bolster education and offer incentives to businesses, like property tax exemptions and low rates for workers comp and unemployment insurance. That’s helped attract a Caterpillar manufacturing plant, which will create 250 jobs in Fargo. Amazon’s expanding its operation in Grand Forks, which will mean 200 customer service jobs.

JIM ARTHAUD: North Dakota is probably the biggest industrial project going on in the United States of America right now.

Jim Arthaud runs Missouri Basin Trucking in Belfield, N.D. Standing in his bustling industrial garage, Arthaud says finding workers is a huge challenge. His company spends $10,000 to $12,000 for every new worker he recruits.

ARTHAUD: We’ve been to probably half the state on job fairs. It’s a full time job for our human resource team.

Shannon Walker’s husband went to one of those job fairs in Michigan and landed a position as an oil truck driver. Shannon got snapped up to work a desk job.

SHANNON WALKER: In Michigan people are on unemployment there for 99 weeks at a time because it’s so hard to find a job. I was looking for two and a half years before we came out here. It’s wonderful. There’s such a big difference. It’s just amazing.

BOB RIPKA: If you lose a job here, just walk a block down the road and get another job, you know?

Yeah, you heard that right.

RIPKA: If you lose a job here, just walk a block down the road and get another job, you know?

That’s Bob Ripka. He works in the oil fields in Williston. He came to North Dakota a few months ago from Minnesota…

RIPKA: I’d say three-quarters of my crew are from Minnesota, there’s a lot of people from Denver. Last three people I met the other day, they’re all from Utah, so now they’re moving in, you know.

And they all need somewhere to live and eat and shop, which has created a massive construction boom.

SHAWN WENKO: This is similar to the California gold rush.

Shawn Wenko is the Workforce Development Coordinator for the city of Williston. He shows me a dozens of ceremonial “ground breaking” shovels stacked in the corner of the office. He says they used to make special shovels for every groundbreaking, but they’ve had to go generic because of all the projects.

WENKO: We have a 700 acre industrial park, which we’re actually turning ground on; we have a 300 acre housing complex to the west; we’ve got a 200 acre retail commercial subdivision, which they’ll be breaking ground on shortly.

SOUND FROM WILLISTON MCDONALD’S DRIVE-THRU: Welcome to McDonald’s, how can I help you?

One local McDonald’s offers workers a $300 signing bonus. Another pays $15 an hour and is offering a 32-inch flat-screen TV to workers who help recruit. All of this is all great for North Dakota, but can this hiring boom be franchised in other states? Governor Jack Dalrymple says, yes.

DALRYMPLE: It is about an educated workforce, low taxation, a friendly regulatory climate.

And it doesn’t hurt if your state happens to be sitting on 400 billion barrels of oil.