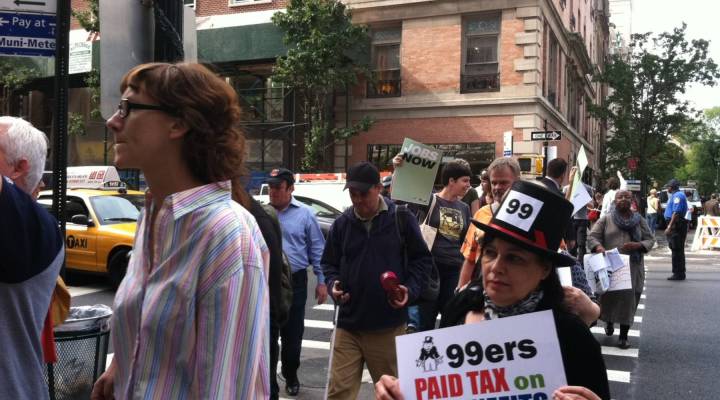 Tess Vigeland: The Occupy Wall Street protest in New York’s Zuccotti Park is now a month old. This past week, participants headed uptown for a so-called Millionaires March past the homes of some of the city’s richest residents. From bank profits to executive pay checks to the lack of jobs — the reasons behind the demonstrations are varied. So is the composition of the protesters.

We asked Marketplace’s Stacey Vanek Smith to spend time on the streets of New York this week and get some of their stories.

Stacey Vanek Smith: The Occupy Wall Street protest isn’t staying on Wall Street either. The Millionaires March started on the eastern border of Central Park, at the home of Newscorp CEO Rupert Murdoch, and then worked its way up Park Avenue past the homes of other high rollers, including JPMorgan Chase CEO Jamie Dimon.

Steve Asher hadn’t joined the protests before, but this march brought him out.

Vanek Smith: How did you get here?

Asher: Subway. And I had to count the pennies to make sure I could afford it.

Asher says he’s upset that a New York state tax on millionaires is expiring at the end of the year. He lost his job in the non-profit sector last year and has been scraping by on unemployment benefits of $400 a week. That’s 400 taxable dollars.

Asher: It is really irritating when I’m struggling, struggling to make that $400 go as far as it can, to hear of a tax cut for a multimillionaire.

DEAR WALL STREET: This is why the people are so angry

Josh Brown, a so-called “1 percenter,” speaks out on the Occupy Wall Street movement. You’ll be surprised by his point of view. Read more and listen

Margaret Passley: Yes, I am taking the day off of work.

Nurse Margaret Passley and several of her colleagues took a day of unpaid leave to show support for the protests.

Passley: We choose to take a day off to come and speak for those who are unable to come out here and speak for themselves. For too long, we the workers refuse to talk, so now we’re taking a stand.

Twenty-three-year old Anne Wiswell has been active in the Occupy Wall Street protests from the start. She says her family’s reversal of fortune is why she’s here. She was a student at the New School until last year, when her parents told her they couldn’t afford pay for her education any more.

Anne Wiswell: It was this massive realization — “Oh my gosh, I have to support myself. Welcome to the real world.” I need to get involved with government policy so that I can afford to live in this country and in this city.

Corporate money influencing politics is what homemaker Laura Paul would like to see change. She’s come from Westchester County to New York City several times to join the protestors. She says she resents comments she’s heard from police officials calling the protestors “anarchists.”

Laura Paul: So when I heard that I came down to say, I’m with them, I’m not an anarchist. I vote and that’s why I’m here.

Bennett Weiss has been part of the protests since the start. He sits in the corner of Zuccotti Park making protest buttons at a card table.

Bennett Weiss: I’m holding up a button that says, “Tax the rich, stop the wars, jobs and Medicare for all.”

Weiss usually spends his days making jewelry for museum shops. But since the protests started, he spends his days in the park and makes jewelry late into the night. He’s not getting much sleep, but says it’s worth it, because the protestors have an important message.

Weiss: Level the income disparity in the country, so the ever-increasing and dangerous gap between the rich and the poor is drastically reduced. That’s what everyone wants here.

Weiss presses another button and hands it to a waiting woman.

Weiss: The sound of democracy at work! Right there, you can have that one. No charge.