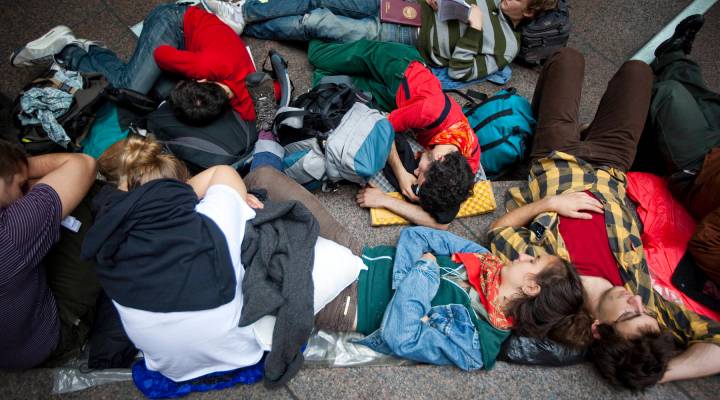 Kai Ryssdal: Wall Street is, as of this hour, still occupied. After what you can only describe as a game of chicken early this morning at Zuccotti Park in lower Manhattan, the four-week-old protest that sits on some of the most expensive price-per-square-foot land in the world has been allowed to continue. City Hall backed down on its promise to close the park for cleaning.

Stacey Vanek Smith: Hundreds of people packed into Zuccotti Park this morning. Many of them live there, including 22-year-old Poncho Guthrie.

Poncho Guthrie: Most of the people realize this is their home, they’re keeping it very clean.

Guthrie has been able to stay here because Zuccotti Park is what’s called a publicly owned private space. Since the ’60s, New York has let developers exceed certain zoning limits, in exchange for creating public plazas.

Amanda Burden: It gives an opportunity for a little green space in this very dense city.

There are more than 500 such spaces in New York and it’s a little unclear who calls the shots in them.

Jerold Kayden: This is a legal gray area.

Jerold Kayden is a professor of urban planning at Harvard. He says the city can’t oust the protesters unless they break the law. Brookfield, the company that owns Zuccotti, has its hands tied a bit too, because the space is public domain.

Kayden: Ironically, Occupy Wall Street has greater rights in this privately owned public space than it would in a public park.

Which, among other things, would close at night.