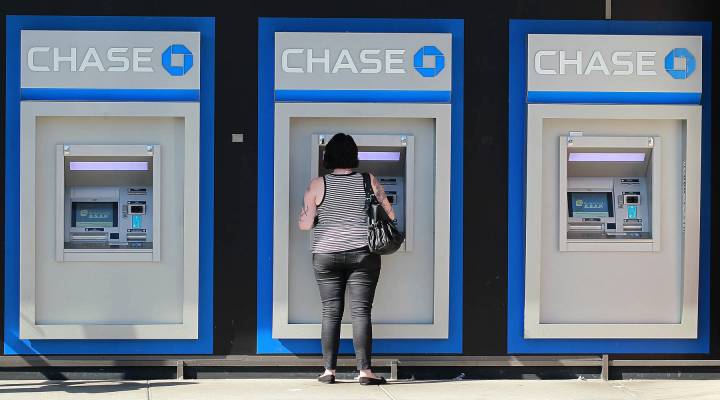 A customer uses an ATM outside of a Chase bank office in Oakland, Calif. Justin Sullivan/Getty Images
Mid-day Update

A customer uses an ATM outside of a Chase bank office in Oakland, Calif. Justin Sullivan/Getty Images

Here are today’s top headlines from the Marketplace Morning Report and from around the web. JP Morgan Chase said this morning that it made $4.3 billion in profit last quarter. That’s down compared to the same period last year — thanks to a drop in investment banking, which is not surprising given the slowdown in corporate deal-making.

An Australian court handed Apple a win, and banned Samsung from selling its new Galaxy tablet down under.

Ryanair — one of the super low cost carriers in Europe — recently started charging people to use the airplane bathroom. That was stingy enough — but now the company has a better idea. It wants to get rid of two of the three airplane bathrooms, and replace them with more seats so it can sell more tickets. You know, that’s a good idea. And really, who needs a seat? Think of how many tickets Ryanair could sell if they just had everyone standing. Most passengers will already be up waiting in line for the one bathroom.

One town near Chicago is also looking at banning eating while driving. The Chicago Tribune reports Oak Park, Ill., could become one of the first cities in the nation to pass a law against eating while behind the wheel. Which is good news for car vacuums everywhere.

And in today’s podcast Mid-day Extra, we talk to Harvard professor Jonathan Zittrain about the news that the Federal Reserve Bank of New York wants to start monitoring blogs, Twitter, and other Internet information sources to better understand public opinion about its decisions.