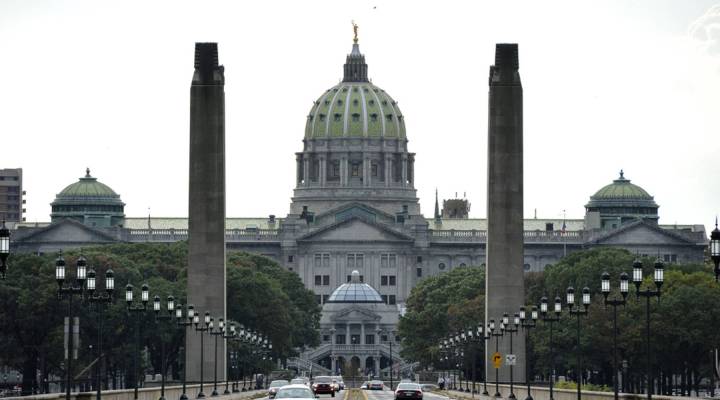 Harrisburg implodes — what other municipalities are in danger?

Harrisburg implodes — what other municipalities are in danger?

When I was a lad I decorated my room with a poster of a nuclear mushroom cloud, with “Harrisburg is Everywhere” written in big letters across the front. It was the 80s, and back then the devastation was caused by a nuclear accident at the Three Mile Island Nuclear Generating Station. This time the damage was done by debt, $458 million of it, to be precise. Burdened by those liabilities, and threatened by numerous lawsuits, the city’s officials decided Harrisburg had to file for bankruptcy protection.

This is heart-stopping news for the Marketplace Daily Pulse, as municipalities rarely file for bankruptcy. And the bad news is that there are several other municipalities that are in danger as well.

So far this year, two other municipalities have filed for bankruptcy: Boise County, Idaho, and Central Falls, R.I. You can see from the chart above that Central Falls, despite its filing, is still rated Caa1 by Moody’s. That’s because the bondholders are given priority in the bankruptcy, and are first in line to get their money back.

The other municipalities on this list are the eight cities and counties rated by Moody’s that have the worst credit profile, but David Jacobson of Moody’s says that doesn’t necessarily mean they’re going to go bankrupt any time soon.

“Most are holding up very well,” he says, “Just because you have a speculative grade rating doesn’t man you’re going to default. Most everyone on the list has continued to pay their bills.”

He wasn’t able to give specifics about those municipalities that aren’t paying their bills right now, but he noted that Jefferson County, Ala., was recently able to cut a deal with its creditors last month to avoid filing for bankruptcy.

David Kotok of Cumberland Advisors says municipal bondholders tend to be insulated from bankruptcy, because they’re often protected by state laws that guarantee bonds at state taxpayers expense. “The fact [a municipality may file for bankruptcy does not mean the debt will be written down,” Kotok says. “Bondholders often have claims that are very well secured. It [also] depends on the law of the state. There are 50 states, all of which have different laws.” In the case of Vallejo, Calif., for example, the municipality filed for bankruptcy in 2008, the bondholders were paid in full, and California taxpayers had to pay $10 million in consultant and legal fees.

Moody’s Jacobson said there are four main reasons municipalities are troubled. Some have a very weak economy: “A lot of these are places where the economy has never been good.”

Others have relied on a concentrated tax base, where tax revenues come from people involved a single industry. That causes big problems when that industry either fails, in the case of the auto industry, for example, or relocates. “Adams County, Miss., used to provide a huge number of employees to International Paper, and when IP left town, they never recovered,” Jacobson noted.

Then there’s enterprise risk, where town and cities launch huge infrastructure projects like water and sewer, where there’s no competition from the private sector. This is what brought both Harrisburg and Jefferson County to the brink. Harrisburg issued bonds to build a huge incinerator, and Jefferson loaded up on debt to build an expensive sewer system.

Finally there’s weak budget management, which as the enormous pension liabilities that brought down Central Falls, and did for Vallejo, Calif., in 2008. David Kotok says you could argue that weak budget management is the common denominator in all of these situations, of course. “In Vallejo, the town council voted everybody a raise, and then they had to pay for it,” he notes.

Moody’s Jacobson says that although there are some basket cases in the municipal pool, the vast majority are safe. Moody’s lists a total of 26 speculative-grade municipalities, and Jacobson points out that’s less than one-tenth of one percent of rated municipalities in the country. “They are not emblematic of the overall economy,” he says.