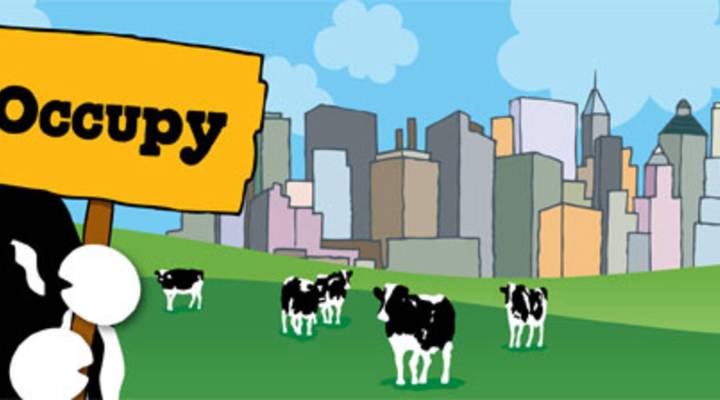 Ben and Jerry’s lent its impeccable liberal credentials to the Occupy Wall Street protests today. Or its cows did, at least. The ice cream company’s website now features cows holding signs with “Occupy” on them, above the statement To those who Occupy: We stand with you.

No news on whether Ben and Jerry’s is trucking pints of Chubby Hubby and Dublin Mudslide down to Wall Street. Still, the news of such sweet support for people protesting the disparity of wealth in this country is strengthening the Marketplace Daily Pulse today.

Ben and Jerry’s is just the latest organization to join the protesters. Supporters include unions, grassroots groups such as The Campaign for America’s Future, and the Democratic Congressional Campaign Committee, which is asking supporters to sign a petition in support of the Occupy Wall Street movement.

“If they were demonstrating peacefully, and making a point, and arguing our case, and drawing attention to the Fed — I would say, good!” Paul said last week.

Most Republicans are critical, however. “I regard the Wall Street protests as a natural outcome of a bad education system teaching them really dumb ideas,” former House Speaker Newt Gingrich (R-Ga.) said on CBS’s “Face the Nation.”

House Majority Leader Eric Cantor (R-Va.) said he was “increasingly concerned” by what he called the “mob protests.”