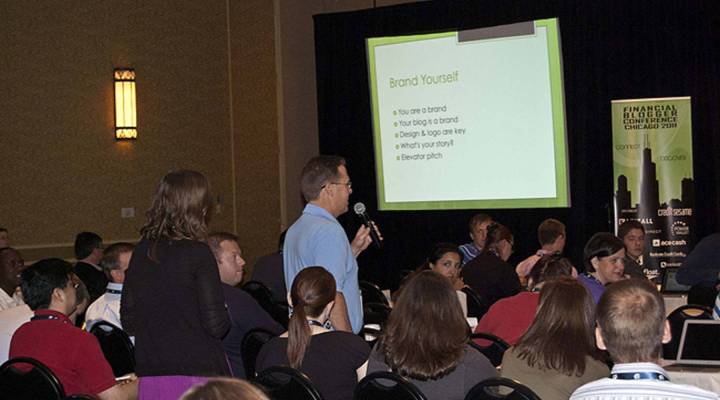 The wide world of financial blogging

The wide world of financial blogging

Tess Vigeland: I spent last weekend in a suburb of Chicago getting my personal finance geek on. And I mean that in the very best possible way. It was a first-ever conference of personal finance bloggers.

You might think I was scoping out the competition. But what I was really doing was finally meeting some of the people whose work I’ve been admiring for years and finding new voices to add to what we do here on the show.

So I wanted to introduce you to some of the folks I met, and get their take on how their community has grown over the last four, five years.

One of the biggest blogs out there is Get Rich Slowly, started by J.D. Roth — who though he’s too modest to admit it, is pretty much a rock star in this crowd. His blog — like so many of them — started out as a chronicle of his efforts to get out of $35,000 in debt.

J.D. Roth: For some reason my story and my voice resonated with people. It turned out I was able to help people and grow an audience at the same time. And here we are, almost six years later, and things have gone very well.

Vigeland: That’s putting it mildly. This is a full-time business for you now. How did that evolve?

Roth: Well, I discovered that it was possible to share information about things that I was finding useful — say, bank accounts for example — that my readers might find useful and that advertisers were willing to pay for.

Now Get Rich Slowly has several staff writers, social media employees and an advertising unit that Roth keeps at arm’s length. You’ve heard him before on this show, by the way. I asked him how readers know which blogs they can trust.

Roth: I believe that there are these time-tested principles that can help people get out of debt and save and build wealth. When I find a site that’s trying to bypass that or they’re trying to pitch something that seems a little fishy, that’s when I don’t really trust the site. But at the same time, most people in this space really are trying to help people.

Vigeland: Do we need thousands of personal finance bloggers?

Roth: We might not need thousands of personal finance bloggers, but we need more than one. I think it’s good that there are many personal finance bloggers, because it gives different voices for different readers. Not everyone learns in the same way. You can usually find one that speaks to who you are and that you can use to help get out of whatever financial predicament you’re in.

And that’s a point I heard over and over at the conference. There were almost 300 bloggers there — and that’s just a fraction of them. And what it means is that you can find one that speaks directly to your financial situation.

Luke Landes writes under the nom de web of “Flexo,”and blogging is how he makes his living.

Luke Landers: When I started in 2003, there were very few websites that really had this personal spin. And to see this grow to the situation today, where we have thousands of people who consider themselves personal finance bloggers, while I’m not surprised by it, I think it’s just a wonderful way to communicate that’s slightly different from what we get from professional writers, big media.

When a reporter’s writing an article about personal finance, they have certain standards that they have to hold to their writing. They usually need to be unbiased, present facts in a certain way, without injecting a lot of their own personal feelings about whatever it is that they’re writing about. And with bloggers, you really have the opportunity to get deep into a person’s psyche, rather than just present the news or to present the latest tax law changes or something like that.

Yeah that would be… me! So perhaps we have two questions: Do we need thousands of personal finance bloggers? And do we need them — plus all of us in traditional media, radio shows, magazines?

Well, MP Dunleavey has worked both sides. She’s written for the New York Times and other mainstream news outlets. Now she is editorial director for DailyWorth.com, a personal finance newsletter for women.

MP Dunleavey: If you added up all the readers of everybody here, including all the overlap, how many millions of Americans does that speak to? How many millions of Americans are desperately searching for this kind of advice? What’s difference right now is that people have had the standard personal finance advice for years, for decades. They’ve had Suze Orman, they’ve had David Bach, they’ve had Dave Ramsey, but what the bloggers offer and what the online community offers is a little bit different, is something that’s more down-to-earth, based on stories. And it speaks to people on a more visceral level.

And if you cruise the personal finance blogosphere, you’ll find how true that is. It’s all about the stories, not the expertise.

Philip Taylor organized the conference. He goes by PT Money and has been blogging since 2007.

Philip Taylor: Who’s the expert: The person who gives high-level generic advice that is sound or the person who’s been through your unique situation and can explain exactly how they went through the process of getting out of debt or whatever the particular situation is? The authority relies on the experience, I guess.

Vigeland:: I did have fun watching in the run-up to this all of the tips that people had for making this conference itself and attending it frugal.

Taylor: I wanted to definitely… There’s a lot of frugal bloggers out there, and they’re paying attention to how much the hotel is. Are they are going to have to pay for wifi at the hotel? I actually got some tweet complaints about that. Yeah, we paid attention to that and people found ways to make content out of this weekend.

And finally some thoughts from Ramit Sethi, who you’ve also heard on the program before. He’s the blockbuster author of I Will Teach You to be Rich. He started blogging back in 2004.

Ramit Sethi: To me the most amazing fact is that about three years ago, it would’ve been almost impossible to quit and go full-time as a personal finance blogger. Now there are so many, it’s unbelievable. The undercover secret of the industry is that many bloggers have more readers than some of the biggest personal finance magazines. But they don’t get the respect they deserve and I think it’s time for a lot of people to pay attention to what these bloggers are doing.

And his main advice to some of the newer bloggers at this conference?

Sethi: My big thing is stop writing the same old stuff. We all know we need to keep a budget, we know that you think I shouldn’t spend money on lattes — which, by the way, I think is nonsense. There’s so much more than “start early, so you can get this compound interest,” and I think as a blogosphere that’s my one challenge. Let’s think differently and let’s focus on our readers, instead of nagging people as to what they should do.

Perhaps advice for beyond the blogger world… Wouldn’t you agree?