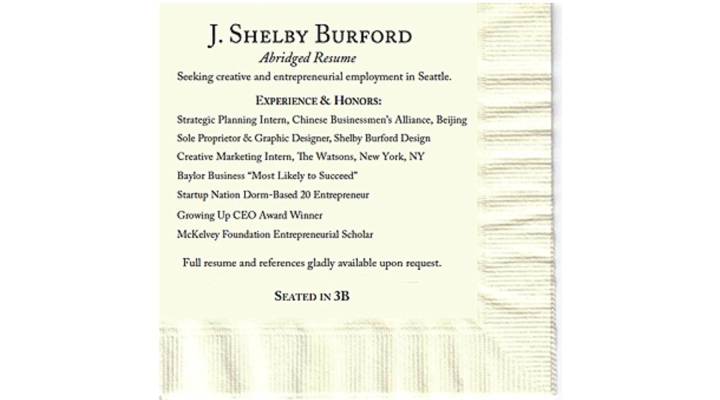 Tess Vigeland: Our little blue plastic friend is heading to Seattle — though I met his new owner at that blogging conference in Schaumburg last weekend. Twenty-two-year-old Shelby Burford was there is his role with Biz Kids, a public television series that teaches kids about money and business.

But that’s not why he gets a pig. Burford graduated from Baylor University in Texas last December. He decided he wanted to live in Seattle. But he didn’t have a job yet. So here’s what happened as he flew to his new city this past New Year’s Day.

Shelby Burford: So I came on the plane, stocked with a pile of 200 cocktail napkins printed with my resume on it. So I paged the flight attendant and said, “Hey, I’m a recent college grad, moving to Seattle without a job, and I have my resume here on these cocktail napkins — do you think there’s any way you could use these napkins with beverage service?” And so she came back and said, “We think we can let you pass them out behind us.” So I passed out these resume cocktail napkins to 160 passengers, to much laughter and buzz on the plane and zero interview requests. So I thought, “Well, that was great, but I still need a job.”

So I e-mailed the Seattle Times. And five days after I moved to Seattle, the front page of the local section was my resume, my contact information and this story. I woke up that morning to a couple e-mails at six in the morning and by the end of the day had more than 100 e-mails and ended up doing 27 interviews before signing on with Biz Kids, which is where I am now. It worked.

It worked. Persistence, people. That’s what earned Burford a job — and a pig.