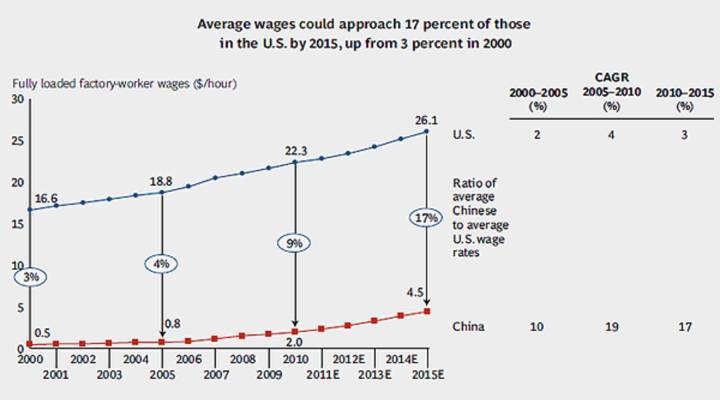 How China’s growth could help us

How China’s growth could help us

If the jobs news today didn’t inspire you, consider reading the latest report from the Boston Consulting Group.

The BCG confirms what we all know, that China is still growing like Jack’s beanstalk, while the U.S. economy continues to struggle. But with growth comes rising labor costs, and BCG says China’s workers could soon price themselves out of the manufacturing market… and price the U.S. back in.

The news that there is a silvery, star-and-stripes lining to the cloud of China’s ascendency is making the Marketplace Daily Pulse beat more strongly today

The report is stuffed full of encouraging statements. The U.S. manufacturing sector remains, robust, it says, and output is still two-and-a-half higher than 1972 levels.

…the trend could cut the U.S.’s merchandise trade deficit with the rest of the world, excluding oil, from $360bn in 2010 to about $260bn by the end of the decade. The shift would also reduce its soaring deficit with China, which reached $273bn in 2010 and has triggered an intense political controversy over China’s exchange rate policies.

Mother Jones notes that as China grows and gets richer, its workers will get paid more and it will make less and less sense to move U.S. production there. It’s a natural brake on offshoring. Add to it China’s demographic trends and you have a country that still has a bright future but is almost certainly not going to be able to keep up the torrid growth rates of the past few decades. Once it hits per capita GDP of $10-15 thousand or so, continued progress is going to come ever more slowly.

At the same time, this isn’t automatically great news for American manufacturing, which, in the short term, is just likely to migrate to India and Malaysia and other countries with even lower labor costs than China. And as for our current account deficit, the key phrase in the article above is “excluding oil.” Obviously China is a significant factor in our trade deficit, but oil is both a bigger and more persistent one. If we want to tackle that — and we do! — we need both macroeconomic action (a weaker dollar) and policy action (ways to reduce our use of OPEC oil).

The Financial Times noted plenty of skepticism that re-shoring will continue to grow. “What’s going to stop the current trickle of extra employment from becoming a real trend is the behaviour by the Chinese government in persistently finding ways to help its domestic manufacturers,” said Scott Paul of the Alliance for American Manufacturing, a lobby group.