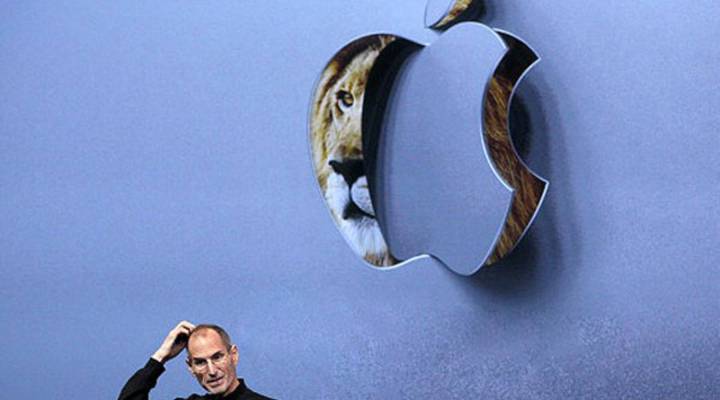 The cool cult of Apple

The cool cult of Apple

Kai Ryssdal: There’s a book on the bookshelf in my office called “The Cult of Mac.” It’s leftover from the guy who had the office before me, but it’s not a bad start to our coverage of Steve Jobs today.

“Cult” is kind of a strong word, but it’s not far off the mark. You don’t hear the kinds of things being said about Apple and Steve Jobs today being said about Dell or Nike. Nobody’s going to be leaving flowers and candles outside a Verizon store anytime soon.

But long before Steve Jobs ever got sick, people — and you know who you are — were calling themselves ‘Mac people.’

Stacey Vanek Smith: Outside of the Apple Store in Soho, Colin Bartlett adds a red apple and a letter to a growing shrine of flowers and candles. Bartlett has two iPhones, an iPad and two MacBooks. He says part of why he’s been so moved by Steve Jobs’ death is his experience with these products.

Colin Bartlett: I think it’s that empathy, that feeling you get when you use it. It makes you feel like the company that built it cares about you.

Making people feel like it cares is exactly why Apple is Apple, says Jen Drexler, a brand analyst at Just Ask a Woman.

Jen Drexler: You joined it. It’s like enrolling in college and wearing the sweatshirt. You joined this brand the second you became hooked on one of the products.

Part of it is the cool factor. Drexler says instead of focusing on selling to businesses and targeting the cubicle culture, Mac aimed its products at musicians, filmmakers and visual artists.

Drexler: And then everyone else who has one can feel a little bit of that too. I can tell you I’ve never done anything creative with mine ever, but I would like to believe people think I do.

And once you buy in to that perception, it’s hard to get out. Apple’s products have never played very well with others. PC documents won’t open on your Mac; your iTunes songs wont load onto your Android phone. All of which creates an aura of superiority, says consumer behavior consultant Britt Beemer.

Britt Beemer: Part of that non-compatibility was kind of a snob appeal Apple also created for its customers.

Beemer points out Apple products also quickly become incompatible with themselves. For instance, if you buy a new iPhone, it won’t work with your 4-year-old MacBook Pro. And when you finally break down and buy a new laptop, you will discover it no longer syncs up with your old iPod. At least that’s what I hear.

Beemer says this cycle, vicious though it feels, is exactly what Apple’s consumers thrive on. The short life span makes Apple products synonymous with what’s new and what’s cool. Which kind of makes you cool.

Beemer did a series of consumer studies for Steve Jobs back in the ’80s. He says even back then, Jobs wanted people to get emotionally attached to their machines.

Beemer: He one time told me, he said, ‘Britt, the day people put their wedding pictures in their computer is the day I know we’ve won.’

EDITOR’S NOTE: The above piece on the personal appeal of Apple products overstated the severity of compatibility issues with other operating systems and devices, and among Apple products. To hear a follow-up conversation between Kai Ryssdal and John Moe, host of the Marketplace Tech Report, listen to Marketplace today, Oct. 7.