Tess Vigeland: Flying to Europe may get a little pricier, thanks to upcoming environmental regulations. Today the European Commission put the finishing touches on a controversial plan to charge airlines for their carbon emissions. That means any airline flying in or out of Europe would have to buy permits to pollute.

But as Marketplace’s Sarah Gardner reports, the EU’s offering an olive branch to angry airlines.

Sarah Gardner: The EU’s emissions plan hit serious turbulence from takeoff: Lawsuits in 2009; now the White House and Congress are trying to stop it.

Steven Lott: And in fact, we estimate, at least based on current carbon prices, the U.S. airlines will be required to pay more than $3 billion into EU coffers through 2020.

EU officials are trying to smooth the ride for the airlines. The big airlines will get most of their permits for free the first year. The rest they’ll buy at auction, and the EU said today that could hike prices for transatlantic flights up to $32. They argue the money airlines save with all those free permits can be invested in greater efficiency. But experts say aviation biofuels are the real key to cutting pollution and they’re not ready for primetime. So airlines are looking to government, like the FAA, to increase air traffic efficiency.

Perry Flint is a spokesman for a global airline trade group.

Perry Flint: If we can address infrastructure, we could eliminate up to 12 percent of CO2 emissions simply by making airports and airways more efficient.

But with the federal budget cramped in economy class right now, the odds of that are small. 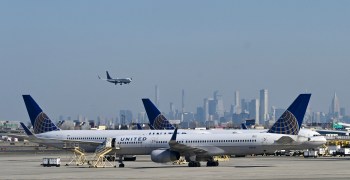 Report: Greener fuels are best path to cutting carbon out of air travel