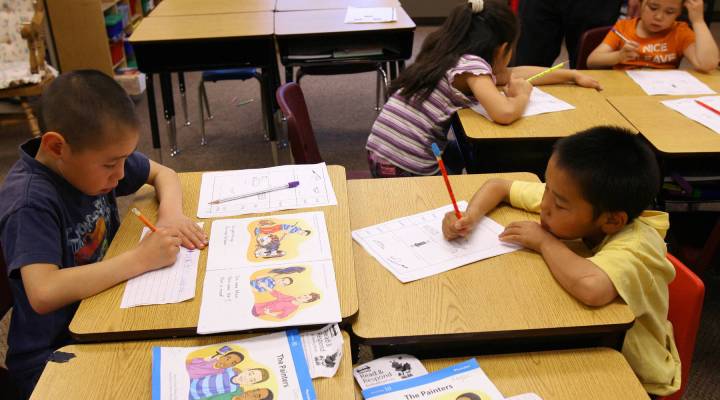 Tess Vigeland: Educators across the country are taking a close look today at what you might call the New No Child Left Behind. Just before the weekend, President Obama offered a little more flexibility to states struggling under the the program’s strict requirements. That includes waivers from some rules, like one in which students must be proficient in reading and math by 2014.

Education historian and N.Y.U. professor Diane Ravitch was a well-known supporter of No Child Left Behind. She has now famously changed her views. We’ve reached her today to talk about what the latest reforms mean. Welcome.

Diane Ravitch: It’s great to be with you.

Vigeland: So after years of wringing our hands over education reform, it’s the teachers at this point getting the brunt of the criticism. Do you think that what the Obama administration has now done will help them do their job better?

Ravitch: No, I think this is going to demoralize teachers across the country. This is like the main plank of the Obama administration’s platform, is to evaluate teachers by their students’ growth and test scores. This will mean more focus on standardized tests. It’s going to lead to more cheating scandals because when you put unusual pressure on people to get scores or be fired, there’ll be people who’ll feel desperate and who cheat. They’re on the wrong track and there just doesn’t seem to be any way to shake them awake and say, ‘Hey guys, we’ve had 10 years of No Child Left Behind. You’re now shifting accountability from schools to teachers, and all you’re doing is making the teachers like they’re being unfairly blamed.’

Vigeland: But certainly, at least the intent has been billed as trying to relieve the pressure on states and schools to meet these standards.

Ravitch: I think the only relief is that they are ending something called “adequate yearly progress,” in which a lot of affluent suburban districts will shrug and say, ‘Thank goodness, we’re not going to be under the gun.’ But the lowest performing schools, the states have to agree to do something called transformation, which means either closing them, turning them into charter schools, firing the principal, firing the teachers. All of these are very punitive, and as far as relief goes, every school still has to do annual testing.

Vigeland: You touched on this earlier, that the effect of all of this on teachers themselves and people frankly who perhaps no longer want to be teachers. I read somewhere that master’s degrees in education are actually on the decline. So what, in your opinion, should be done to bring more skilled teachers into that profession?

Ravitch: You know, I just came back from Finland, and it was such a culture shock for an American educator to go to Finland because this is one of the highest scoring nations in the world. They usually end up in the international assessments either first or second in the world, whereas we’re in the middle. And Finland doesn’t test its kids at all. What they’ve put their bets on over the past 30 years is building a strong profession of educators — they trust their teachers. And I asked teacher after teacher, principal after principal, ‘How would you feel about using your student test scores to evaluate you?’ And they just looked at me as if I were crazy. They said, ‘Well why would we do that?’

Vigeland: But then how should teachers be measured? Because certainly there should be some measure for them — there’s no career where you’re not measured.

Ravitch: The metrics that we use are not good metrics. And I would think that the best way to determine the quality of a teacher is, first of all, to have them well-prepared. I asked these questions again in Finland, and I was told, ‘Everybody comes into the profession well-prepared; they’ve had a five-year preparation period where they get deep academics and they deal with all the special needs. Our classrooms are overwhelmed with children who speak many languages and children who have all kinds of disabilities.’ So there has to be serious training and when people become teachers, having this strong background, they should be judged by their superior — who should be a master teacher — and by their peers. That’s the best kind of judgment, is observation, looking at student work. What I would love to see the president do is to change direction in terms of teaching and begin to raise standards for entry into teaching. What we’ve been doing over the past 10 years is to drop the standards for entry into teaching, so that anyone can become a teacher.

Vigeland: Diane Ravitch teaches at New York University. Her book is “The Death and Life of the Great American School System: How Testing and Choice are Undermining Education.” Thanks so much for being with us.