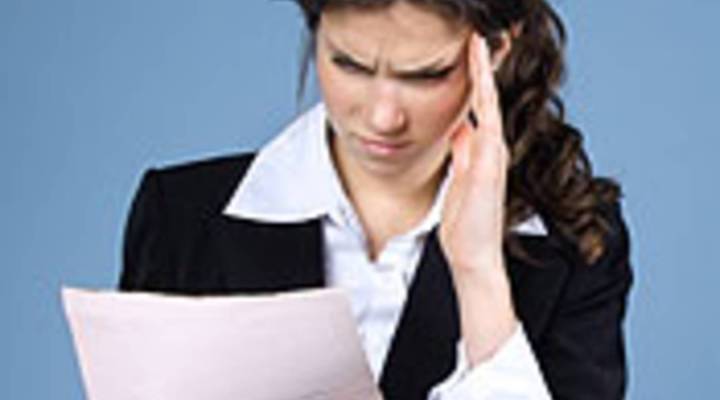 COPY
A woman is confused as she reads a document iStockPhoto

Tess Vigeland: About a month ago, the hyper-prominent blogger and MetaFilter founder Matt Haughey took to his blog to vent about his declining credit score. The title of the post was “Credit Scores are Bull…” well, we’ll leave it there.

He outlined his credit history and pointed out his score was higher when he carried more debt and was dropping as he seemingly became a more responsible financial citizen. The blogosphere lit up. The New York Times featured the debate. And John Ulzheimer of SmartCredit.com responded online.

We thought Matt’s post highlighted several things that we find ridiculous about credit scores. So I’ve got both gentlemen with me to hash it out. Matt, John welcome to the program.

Matt Haughey: Thanks for having me.

John Ulzheimer: Thank you very much for having me.

Vigeland: Well Matt, let’s start off with the blog post. Tell us what your current credit score is and what your beef is with that score.

Haughey: My current credit score is a 690. And I guess my beef is, I’m in the best financial position I’ve been in my whole life now, and I have the lowest credit score I’ve had in years. And when I had my highest score, I had tons of debt. I’d just been paying the minimums on lots of credit cards and I had a great credit score. I just assumed credit scores were a number you can put on someone and that would somehow it would reflect their ability to pay.

Vigeland: OK. Are there any aspects of your finances that you do not share in this post that would give us some insight into your score?

Haughey: Well, I guess I told John I had one late payment like five years ago, and that knocked me down 20, 30 points.

Haughey: No, it was like… I was auto-paying my mortgage online and there was some weird $30 charge that they wouldn’t allow me to pay online. It basically never showed up in my e-mail as a bill until I suddenly got paper bills saying, “Hey, this thing is two months past due.” And that was almost five years ago and I did come down 30 points or something from that. But since then, it dropped a hundred more. Mostly it’s not having credit cards. And I think that’s a good thing. I just buy everything with my ATM Visa card with real cash, and that’s not good in the credit score world.

Vigeland: Alright John, let’s get to you. Your first note to Matt was essentially that what he was looking at was not his FICO score, correct?

Ulzheimer: Yeah. We identified issue number one, which is that all of the advice that Matt was given was being given to improve a credit score that A. has zero relevance in the world of financial services. No lender uses it, no insurance company uses it.

Haughey: But John, I followed your advice to try MyFICO.com and it was only two points off.

Ulzheimer: What Matt’s referring to is we actually communicated through his blog and I suggested he kind of get off the FreeCreditReport.com track and get on the FICO track. Which would at least put him in the environment where the score that he’s seeing would be relevant information that perhaps a bank that he would want to do business with in the future would be able to see. So the fact that the scores were similar were really immaterial. What is material is that no one item on your credit report drives your score to be whatever it is.

But the primary factor in your credit score is gonna be are you paying your bills on time and what kind of debt you’re in. Now, don’t get me wrong Matt. If they screwed you by not giving you proper notice that you couldn’t pay that $30 fee online, I’m in your corner. The problem when you look at a credit report is that there’s no back story. There’s no way for a credit scoring system to look at a credit report and say, “Hey look, this is a billing snafu. These delinquencies should not be considered in anybody’s score.” There’s no way for them to distinguish between a valid and an invalid late payment.

Vigeland: Yeah, but John, from what Matt told us, that was five years ago. But his credit score has been falling more recently. So, why would something that happened five years ago suddenly star to show up as a problem for him?

Ulzheimer: Well, we don’t know that that’s actually occurred, because we don’t know what his FICO score was five years ago when this all started.

Vigeland: So then if that’s the case Matt, do you still feel comfortable saying some of the things that you said on your blog, given that you weren’t looking at the most common and most utilized score, which is the FICO score?

Haughey: Well, I mean, even when I did, I got a two-point difference out of a 700, so I assume it’s a very accurate estimation.

Vigeland: Let me jump in here: Let’s take one example, Matt’s complaint that his score went down when he closed cards. And John, you talked about — in your response — that it was because his utilization went up when he closed cards. He was using more of the credit limit on fewer cards. And in essence, the system punishes you for shedding cards and closing accounts.

Ulzheimer: Closing a card does not have any influence at all over the length of credit history. A card that’s open that’s 10 years old is just as old as a card that’s closed that’s 10 years old. That’s actually a pretty common myth in credit scoring. But the first part of what you said is absolutely true. If you do close cards and you’re carrying balances on other cards that are still open, you’re reducing what’s called “open to buy” or the aggregate amount of your credit limits.

Vigeland: But then basically, again, that is an argument for having more cards.

Ulzheimer: I would suggest it’s an argument to not have credit card debt than it is to have open cards.

Vigeland: But if you have no credit cards, your score is gonna go down.

Haughey: OK. I’ve been told again and again and again that I shouldn’t have closed my credit cards. You know, it starts to feel like a part-time job to nurse this score. It’s a ridiculous amount of work.

Ulzheimer: What he’s saying is absolutely true. Here’s the deal: Credit scoring is a complicated and sometimes infuriating and maddening machine. And I’m the first to say that is absolutely the case. But I would say that to simply suggest that they’re unfair and we’d be better off without them, and some stuff doesn’t make common sense — I think that’s being a little short-sighted.

In the next 15 seconds, I will explain how to have fantastic FICO scores forever: Pay all of your bills on time, don’t ever give anybody an excuse to say something bad about to a credit reporting agency, like delinquencies or collections. If you choose to use credit cards, maintain as low of a balance as you possibly can, relative to the credit limit. Shop for credit only when you need credit, not to get the discount at the mall during Christmas time. And as your credit report gets older organically and as you build a more diverse set of accounts on your credit report, you will earn and maintain very very good scores. That’s it.

Vigeland: So Matt, has this changed your mind at all?

Haughey: Not really. I understand everything John just said. I mean, the core issue is I’ve watched my score go gently down over the last couple years.

Vigeland: Although it was not your FICO score.

Haughey: Right, but I think it’s a close estimate. I watched it go down by just practicing good financial habits, by using cash instead of credit, pouring all my money into retirement. I know these are things that have nothing to do with credit, and I know they have no access to my accounts, so the credit stuff is just going to be an estimate based on my activity.

Vigeland: Alright, it has been an interest conversation. Thank you both for joining us. Matt Haughey is a long-time blogger, founder of MetaFilter.com. Thanks so much for coming in.

Vigeland: And John Ulzheimer is president of consumer education at SmartCredit.com. Thank you as well.

Ulzheimer: Thanks for having me Tess.